It has occurred to me once or twice lately how much I miss Bird's Eye foods, we used to have them in the UK and in the States, but for some reason we don't have them in Ontario. They are specifically frozen foods and we used to enjoy a lot of their products. Seems odd we can get them in the US but not here. Same thing with Butter Buds which I used to use instead of the high calorie real thing. I can buy them through Amazon but they are very expensive.

Today, I am pleased to say the PSW came at 9 and is doing so again tomorrow.  Much better than 7. Not only that, it is the same guy twice in a row so he should be able to do the exercises with Matt without my participation. Turns out he is Colombian so I spoke to him in Spanish. He didn't understand me. I am working so hard at Spanish and he didn't understand me, I am mortified.

I cooked some flank steak at the weekend and we finished it Monday night. It has to be carved and I hate carving. I never did it until recently. When I was a young woman, carving was always done by the man of the house although in Georgian days, in a well to do family, everyone carved whatever cooked meat was served in front of them at the table. Either way, I never carved until recently and I am not good at it. I do try and keep the knives good and sharp of course, but.....

Because of this Covid-19 business the government is, apparently, shelling out some money for seniors, not sure why, but they are, and I was wondering if this money is going to be taxable. I remember, many years ago, when I was working, things were tough (I don't remember why) so companies were offered the choice of closing on Fridays and employees were paid by the government. Me being one of them When it came to tax time, we basically paid it all back. Seemed like a rip off to me.

David Gascoigne wrote about his new friend DB (David's Buddy) which is a chipmunk that feeds out of his  hand, which is so cure. However, it reminded me, we were on a campsite in Wawa, considerably north of here, a number of years ago, and I was watching chipmunks and wearing flip flops. I don't know if they mistook me for food, but one of them nipped my toe. I jumped, they fled.

I am sure you are all sick and tired of asparagus recipes and, bearing in mind the season is just about finished, I thought I would post something else. This looks pretty good to me.

It’s crucial to use thinly sliced bacon here, (not thick-cut) to achieve an evenly crisp crust. Seek out new crop potatoes for this recipe; they cook more evenly than potatoes that have been in storage. 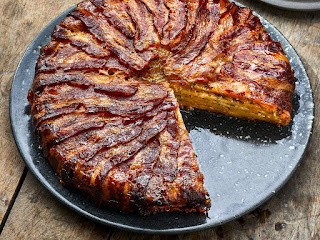 Save the bacon drippings for toast, basting roasted chicken, or for making cornbread.

1. Preheat oven to 350°F with rack in middle position. (A) Place 1 bacon slice in a 10-inch cast-iron skillet so that one end starts in center of skillet and extends along bottom and up side of skillet, allowing the other end to hang over skillet edge. Repeat process using remaining bacon slices, working in a circular pattern and overlapping slices slightly to completely cover bottom and sides of skillet. To reduce the thickness of overlapped bacon in center of skillet, stagger every other slice starting 2 inches from center (creating a longer overhang). Once all bacon is in place, flatten the center using the palm of your hand, ensuring there are no gaps in bacon. Sprinkle 1 teaspoon pepper evenly over bacon.

2. Stir together onion, garlic, rosemary, thyme, sage, and tarragon in a medium bowl; set aside.

3. Sprinkle about 1/2 cup cheese in an even layer over bacon in bottom of skillet. Starting around the inside edge of skillet and working in toward the center, arrange potato slices in concentric circles, overlapping slices by about 1/3 inch, until bottom of skillet is covered with a single layer of potatoes. Sprinkle evenly with 1/4 teaspoon pepper, 1/2 teaspoon salt, and about 1/3 cup onion mixture. Repeat layering process 5 times using remaining cheese, potatoes, pepper, salt, and onion mixture (sprinkle any remaining cheese over final layer). After each layer of potatoes, firmly press down to compact layers. Once all layers are in place, potato mixture will be mounded above rim of skillet.

4. Fold overhanging bacon neatly up and over top of potato mixture, working in a circular pattern and ensuring there are no gaps. To prevent the bacon from shrinking back during cooking, place a 5-inch parchment paper circle on center of tart; top with a small (about 6 inch) ovenproof lid. Place skillet on a rimmed baking sheet.

6. Remove tart from oven. Carefully pour off skillet drippings; discard or reserve for another use. Let tart rest in skillet 10 minutes. Using a spatula, loosen bottom and sides of tart; invert onto a rimmed baking sheet. Pat gently with paper towels to remove excess grease. Invert tart onto a serving plate. Slice into wedges, and serve hot.

Seek out new-crop potatoes at your local farmers market.