One day is good, next day is bad. We started off with Matt being in howling pain at 3 a.m. I was given pills to give to him when this happened as it has done a couple of times before. It's pretty awful and he was beating the bed and crying in pain. Tossing and thrashing around, etc. so, even though I knew it was pointless really, I called the ambulance. Eventually they came one guy protected up to the hilt with a breather type mask and a plexiglass shield over his face and the young woman with him just had a simple throw away mask. They were both wearing gowns and hazmat type trousers. The result of this was, I had trouble understanding the young man, let alone Matt. I couldn't get through to him to speak slowly and clearly. I certainly couldn't get him to say less. They took all his readings and such and were preparing to take him to the hospital but double checked with me. I said to Matt did he really want to go to the hospital, spend 5 or 6 hours on a very hard and uncomfortable bed waiting to see the doctor when he was obviously so much better by that time. In the end he agreed he didn't want to go so I signed their computer and eventually off they went. I persuaded Matt to go to bed and then did so myself. Of course, I had trouble getting back to sleep.

I had set the alarm for 7 as the PSW said he would be here for 8:30 to 9. I mentioned that to Matt when I called him. He crawled out of bed and said he would NOT go anywhere with anyone. I kept assuring him he was not going anywhere. Unfortunately, but the time the PSW arrived, he had decided he was NOT going to let him help him in any way Not to shower, dress or anything else, he was quite capable of doing it himself. The PSW kindly got rid of my recycling and then left. The result was, no shower and of course I had to supervise dressing. Some help that was.

10:30 I had a conference meeting on line with several Alzheimer spouses so I made my salad before it started. We chatted for 1 1/2 hours and discussed all kinds of  things. I was pleased to see two of my friends from the session I attended some while ago. In fact today we had a pretty full house. We use Zoom and it seems to work very well although we do have an odd glitch or two at the beginning, none of us are electronic whizz kids LOL.

Then, I finished making my lunch and did Matt's. I had several jobs to do online and finally I got to sit down on my lounger and have a nap. Not sure how long I slept but as expected, a delivery came of another pair of slippers. Matt insisted on putting them on and wore them for a while. They are the kind you need to wear a bit to get your feet used to them, but he decided they were pressing down on his toes and hurt. They actually looked fine to me, but then I guess I am not wearing them.

Later I did some Spanish and then hunted up a new recipe for supper, had an email with some Instant Pot Dump and Go recipes so I decided to try one. It was pretty good but it did want some salt. I did not have Balsamic dressing so I used Italian. I have ordered some Balsamic to try another time.

You worn out yet? I was/am.

Tender, moist bites of shredded chicken flavored with balsamic dressing. With literally only 2 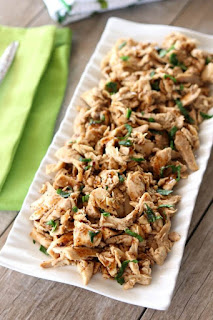 ingredients and the fact that it’s made in the Instant Pot, this recipe couldn’t be easier to make. This balsamic chicken tastes great on salads, over rice or with a baked potato.

1. Add chicken into the Instant Pot and top with the salad dressing.

2. Cover the Instant Pot and secure the lid. Make sure the valve is set to sealing. Set the manual/pressure cook button to 15 minutes for fresh thighs or breasts or 18 minutes for frozen.

3. When time is up let the pot sit for 10 minutes and then move the valve to venting. Remove the lid.

4. Shred the chicken and serve it drizzled with sauce.

Author Notes
Chicken: you can use frozen or fresh boneless skinless chicken thighs or breasts for this recipe. You can also use bone-in chicken pieces with the skin removed.

Pot in pot rice: You can cook rice at the same time using the pot in pot method. To see this demonstrated watch the video. For white rice, converted rice, basmati rice use 1.5 cups of water to 1 cup of rice. For jasmine rice use 1 cup water to 1 cup rice. Brown rice would not work in this recipe since the cooking time is too short.