Of course, this morning, Friday, there were no memories of last night at all. Just as well really. Today he went for a shower with the PSW just like a lamb. The minute he left, I scooted out to the asparagus farm and was lucky enough to get red lights for the first half of the journey. They have finally instigated the drive through process which was great, in and out in no time with my asparagus in the car. I checked in with Matt to tell him I was on my way home. Nearly home and I went to our closest liquor store and, wonder of wonders, there wasn't a line up so I walked straight in. Only trouble was, I got caught in the line up waiting to pay, instead. Not as bad though.

My car had a nice little run which is a good thing as we aren't going anywhere much lately, along with everyone else. Of course, now I have to make some brine to can (bottle, pickle) more asparagus. The Physiotherapist is due at 2 today so won't be today probably. I haven't figured on supper yet. Thought I might do scallops and spaghetti but I had noodles for lunch and I am gaining enough weight as it is. Ended up doing Shrimp Creole. Yummy.

This afternoon the young man who is Matt's Physiotherapist, came to see him and show him exercises to stretch his ligaments and muscles. Fairly simple, but if practiced regularly, should help him. Finger crossed. He is quite a fun person to talk to and we happened to talk about sushi and how I first met Wasabi. Turns out that what I think of as wasabi is horseradish root coloured. However, Googling it, as he suggested, explains that wasabi is a kind of horseradish anyway but as he explained, it is rare and therefore astronomically expensive. I had told him the story of the first time I had eaten it and "colleagues" had persuaded me to eat a large amount and it nearly blew my head off.

Last year I had an "in" with a young woman who was growing lovage and so I was able to try this soup which was deliciou. I have to find a new source. If you have access to lovage, I urge you to try it, it was good. Great with peas too. 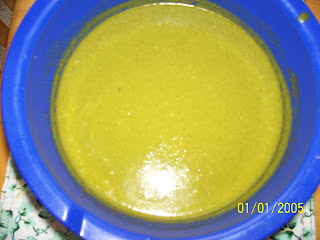 1. Heat a frying pan on medium heat and add canola oil when hot. Stir onion and garlic until fragrant and onion become translucent. Stir in lovage for 30 seconds before adding grilled asparagus and sea salt. Pour into a large pot and add chicken broth and bring to a boil. Let it cook on medium heat until asparagus is soft. About 15 minutes. Stir in paprika. Serve as is or blend in the blender. Garnish with chopped lovage.