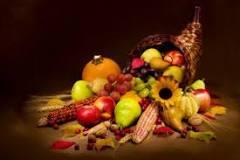 Today is Thanksgiving, so to all my Canadian friends, I hope you have a happy one. As many of you know, we celebrated on Saturday. Inviting a friend to join us. As a nod to everyone's expectation of having pumpkin pie, which, sorry, we don't like, I served home made Pumpkin Soup as a starter. It was then followed by the turkey breast with Bread Sauce, the Spanish stuffing I mentioned the other day, Brussels Sprouts (I decided to boil them as I usually do) French cut flat or runner beans, mushroom gravy and English roast potatoes. As dessert, I cheated and bought a Tira Misu from the

local grocery store. It was pretty good. No liquor in it, but as our guest was driving, a glass of wine is all she allowed herself. It was an enjoyable evening. I don't know if I have ever mentioned it, but I always use a cooking bag (oven bag) for my turkey breasts. A 4 lb breast took 1 1/2 hrs at 350°F. and no messy roasting pan.

The only problem, for me, is that after I have been in the kitchen for a while, my back starts to kill me and I have to keep taking breaks. Oh the joys of aging. I wanted a picture for this section and came across the above with an article giving some tips on reducing such pain.

Being a Monday today we are bowling in our league, and our team just has to do something about getting off the bottom rung of the ladder. Although, as it was pointed out to me, amassing points is difficult when not all the team is there, or not all bowling as Matt wasn't last Monday. We are not doing frantically well anyway I'm afraid.

I went to our exercise class on Friday for the first time in a while, partly because of all the construction and partly because of Matt's operation. He, by the way, is doing fine and his leg would is healing up beautifully. His head wound you can hardly see any more. Anyway, I was expecting to find it difficult after not doing exercises for so long and my legs were aching a few times. However, unexpectedly, I didn't feel it the next day so I guess I was fitter than I thought.

I love noodles so this is right up my street. Of course, I don't eat them as often as I would like to, my waist line would suffer.


Garlicky, gingery and as spicy as you dare to make it, this Asian-influenced pan-fried noodle dish comes together in minutes. Most of the ingredients are pantry staples, which means you can make it whenever you need a comforting noodle dish that comes with a bite. If you can’t find the Chinese egg noodles (also called Hong Kong-stylenoodles), you can make this with rice noodles or soba. The key is to only boil them until they are halfway done. (They should be pliable but still firm in the center.) They will finish cooking when you pan-fry them. 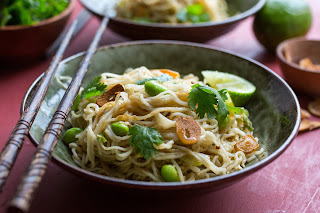