Two kayakers and a surfer were given the fright of their lives in Santa Cruz, California, when a couple of humpba 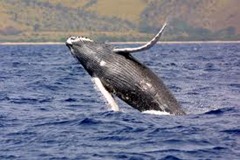 ck whales breached (surfaced) right by them. Somebody videod it, quite a picture, I found it incredible watching it so gawd knows what it would have been like if you had been there. Couldn’t figure out what happened to the surfer. OK, I watched it again and he climbed into the kayak. This is a pic of a humpback whale but not one of the ones in the video. Do watch the video, it really is something. The whales were feeding which is why the birds are going nuts I guess as fish/krill came up to the surface.

I am pleased to report our dinner went very well on Saturday night, we sure didn’t have much left. We had enough beef for a sandwich for lunch the next day. Its always nice when your guests appreciate what you cook for them. There was a lot of technology talk so poor Matt got left out of it somewhat.

Big hoo ha about a Canadian activist being roughed up because he was trying to break through a blockade maintained on Palestine by Israel. Er, sorry, blockade running is an act of war. If you are not prepared for the possible consequences, don’t do it. It is a bit dumb for people to interfere in other people’s wars anyway. I know countries do it, but individual groups shouldn’t, IMHOP. People have the idea that blockade running is romantic and brave,  sorry, its not. Maybe these guys have read too much Gone With the Wind!!!

Last night we watched an excellent movie,Gran Torino a Clint Eastwood production with him as the star. It is really well done and although, at the beginning, I didn’t really want to watch it, I couldn’t help doing so. If you have never seen it and get the chance, do watch it. It is not actually about cars per se, but about a disgruntled Korean vet who ends up changing his mind and befriending a Hmung Korean boy.

Here is another recipe which appealed to me as being an easy and tasty one to serve for guests. You can prepared it in advance and then bake it when you are ready.

The casserole may also be baked in a 13 by 9-inch baking dish. The baking dish with the potatoes can be covered with plastic and refrigerated for up to 24 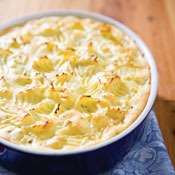 hours. When ready to bake, let the casserole sit at room temperature for 1 hour. Increase the baking time by 10 minutes.

DIRECTIONS
Adjust an oven rack to the upper-middle position and heat the oven to 375 degrees. Bring the potatoes and water to cover by 1 inch to a boil in a large pot over high heat. Reduce the heat to medium and simmer until the potatoes are tender, about 20 minutes.
Heat the half-and-half, broth, butter, garlic, mustard, and salt in a saucepan over medium-low heat until smooth, about 5 minutes. Keep warm.

Drain the potatoes and transfer them to a large bowl. With an electric mixer on medium-low speed, beat the potatoes, slowly adding the half-and-half mixture until smooth and creamy, about 1 minute. Scrape down the bowl; beat in the eggs 1 at a time until incorporated. Fold in the chives.

Transfer the potato mixture to a greased 2-quart gratin dish. Use a fork to make a peaked design on the potatoes. Bake until the potatoes rise and brown, about 35 minutes. Let cool 10 minutes. Serve