In the news yesterday, the story of an incredible woman of 106 who is as lively as you can imagine. Her name is Ma 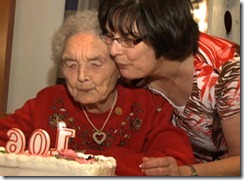 rgaret Moores, and she just celebrated her birthday in Newfoundland. Can you imagine the memories she must have, I hope someone in the family writes them down. Not only that, she loves pizza and fries and her daughter says she has never drunk water in her life. Maybe I should change my diet. She says she has knocked on death’s door a few times but they kept sending her away. I thought the woman we bowl with was pretty incredible but she is 10 years younger, just a kid.

You know, it seems to me, if you become well known, people suddenly come out of the woodwork to accuse you of sexual misdemeanors – why, I wonder, do they want their moment in the spotlight or what? I realise  some well known people have done these things, but I cannot believe everyone accused has really done what they are accused of, or am I wrong, are there more sexual transgressors out there than I think? Its like sexual harassment in the workplace, I worked for a lot of years and neither was harassed myself nor do I know of anyone who was. And no, I don’t look like the back end of a bus, LOL. Of course I guess even flirting is now considered to be harassment whereas in my day that was considered harmless fun. If anything, it was flattering.

This week we are following Jeopardy Tournament of 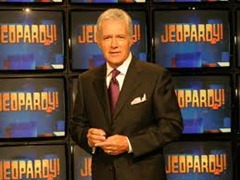 Champions – there were three episodes of quarter finals which started last week, two this week. In fact the champions haven’t been doing very well, the ones that won their rounds have scored pretty well, but everyone else’s scores, so far, have been the pits except for last night, much better. Very surprising for champions. There is a lot of money at stake too.

I received my regular recipe from Mushrooms Canada, but there was so much going on at the time, I forgot to share it with you. My bad. 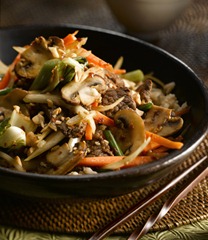 In a small measuring cup mix soy sauce, vinegar, sugar, sesame oil, and cornstarch until smooth. Pour half into a medium bowl for marinade and reserve the other half until later. Slice the beef across the grain into very thin narrow slices; stir beef into marinade mixture and marinate at least 20 minutes. Meanwhile cook rice according to package directions. Separate stalks of bok choy and remove leaves set both aside.

In a large non-stick skillet or wok heat 2 tsp (10 mL) oil until hot over medium- high heat; add ginger, garlic and pepper flakes and stir-fry 30 seconds or until fragrant but not browned. Remove beef from marinade with slotted spoon: add to hot skillet and stir-fry 2-3 minutes or until browned. Transfer all to a bowl.

Add remaining 1 tsp (5 mL) oil to the skillet. Add bok choy stalks, carrots, onions and mushrooms; stir-fry 3-5 minutes; add broth and corn; cover and steam 2-3 minutes or until vegetables are crisp- tender. Stir in bok choy leaves and push vegetables to the side of skillet; pour reserved starch mixture and left over marinade into middle of skillet; bring to boil for 1 minute, stirring constantly until slightly thickened. Return the meat mixture with any accumulated juices and peanuts; toss just until hot. Serve over hot rice and garnish with cilantro or green onions.

• Substitute shiitake caps for half of the sliced mushrooms.