I bowled yesterday for the first time in a couple of weeks, by the end, my legs were aching and later I was having trouble walking. Whether I can manage bowling again today, gawd only knows. I mentioned we were going to lunch somewhere different, we did, we went to the Elmira Donut and Deli which was somewhat tucked round a corner and is run by Me 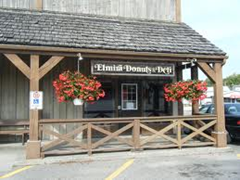 nnonites, but the food was very good. I had their Chicken and Wild Rice soup followed by a bacon, lettuce and tomato sandwich, Matt also had a BLT and I had coffee too. It only came to just over $11, very good deal. They also had lots of home made breads, pies, cookies, etc. etc. I bought a whole wheat loaf, fresh out of the oven, for $2. Unbelievable. Wish I lived closer, I would patronise them more often. Lovely to be able to get such nice fresh goods. The soup, by the way, was particularly delicious. Their other soup was broccoli and cheese which those who had it said was also very good.

Yesterday, I think we saw more Mennonite buggies than I have ever seen; everywhere we looked – 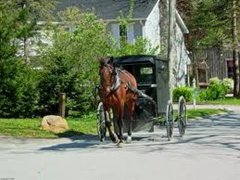 there was even one parked by the restaurant, I couldn’t tell if the horses were tied up or not, I suppose they must have been. It must be pretty chilly driving in a horse and buggy at this time of year, and its not really winter yet. Saw at least a couple of totally open carriages, although most of them were the usual enclosed ones.

As for bowling, I had one good game, one reasonable game and one lousy game. Matt was the other way round and his last game was in the 200s. My first game I couldn’t do anything wrong. Oh if only!! One friend came with her hubby although he is not a bowler, it was their 51st wedding anniversary today. It doesn’t seem like a year ago we were at a party celebrating their 50th.

On Wednesday night I watched Harry Potter and the

Deathly Hallows part 2. I didn’t really think it was as good as the first half. I saw the first three or four movies, in fact I own them, then missed a few and came back at the end. I guess one knew he was going to defeat Voldemort finally despite some of the suspenseful things which happened during the course of the movie. One of the things which really teed me off, so much of it was extremely dark, I couldn’t see what was going on - if anything. I guess if I had seen it in the theatre I would have seen more, but, I didn’t, I watched it on my laptop. My favourite character, right from the beginning, was Snape, Alan Rickman, I thought he was very good. So, that’s the end of an era. I wonder what all these actors will do now. Only one I knew recently was Maggie Smith and of course, the original Dumbledore, Richard Harris, who is no longer with us. I wonder if J.K. Rowland will bother to write anything else or whether HP was all her muse and that’s it.

Not sure what reminded me of this recipe, but we made it a few times in the States, I should say Matt did, and then forgot about it. It is a pretty good dish. Instructions: For the chicken mousse: Puree chicken til smooth, add seasoning and egg. Pulse just to combine and scrape the sides. Whilst processor running add cream gradually through feed tube. Chill and reserve.

Wash and slice the mushrooms. In a hot sauté pan cook with the butter. When mushrooms are brown add shallots and herbs. remove from pan and chill.

Fold together mushrooms and chicken

Lay out plastic wrap on a table. Down the centre, spoon a 1 inch pile of mixture. Roll plastic into a log. Tie the ends with string and tie into links. Poach in simmering water for 10 mins. Shock the links in ice water. This can be done up to 3 days ahead.

To serve, remove plastic and grill or roast until hot through. About 10 mins. Slice and serve with a tossed salad.