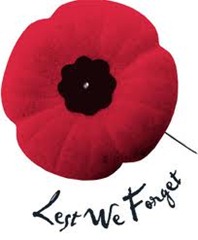 of a 66 leg predator called Tegopelte Gigas off the coast of British Columbia on the sea floor in  Burgess Shale which has rendered all kinds of interesting facts; such footprints surviving is very rare; they are half a billion years old. To me

this picture makes it look like a clothes brush. They figure the critter had to have been 30 centimetres long which is about the length of an average ruler. Read the article, its interesting. I must say, looking at pictures of the tracks, I cannot imagine why anyone would realise what they were.

Another story that caught my eye was about a rodeo bull in Hawaii, Skywalker,

which got its head caught in a tire that someone had dumped on the ranch. The bull could neither eat nor drink all day and no-one could approach him til he got worn out and then someone managed to ease it off with a piece of wood. The first thing Skywalker did was go to the water trough. The owner of the ranch is asking people to respect the land and not use it as a dumping ground. The tire was 20 kg, that’s pretty heavy. Apparently no-one has ever stayed on Skywalker the full 8 minutes required in rodeo competition.

Lots of interesting stories in the news, this one is about two male penguins who are about to be split

up by the Toronto Zoo. This story has gone viral, because people believe they penguins are gay, but if you read the article the situation is explained. They are very social birds and need company but will mate if introduced to female birds, in fact one of them did have a female partner and produced a number of chicks before the female died. As the zoo states, people tend to anthropomorphize (attribute human behaviour) things, but this is not the case. Just like a couple of guys who have each other’s backs.

Just seen, on Facebook, a posting by a friend showing a 10 Rand bill with an injured rhino on it. I would like to believe it would help people fight rhino poaching, it will certainly keep South Africans aware of the problem although, sadly, like everything else, it will become so familiar people probably won’t see it any more. 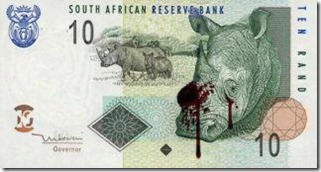 As many of you know, I love risotto, but I have always thought standing stirring for ages on end was something of a pain. Here is a recipe for baked risotto. It didn’t come with a picture, but I am guessing then end result would look something like this. I will certainly be trying this recipe. 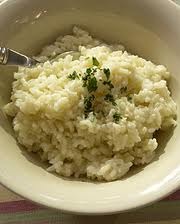 Heat the olive oil in a Dutch oven, or deep ovenproof saute pan, over medium heat. Add the onions and cook them, stirring occasionally, for 3 to 5 minutes, until they are softened.

Stir in brown rice and garlic and cook them, stirring constantly, for 1 to 2 minutes. Stir in wine and simmer the rice mixture until the wine is almost completely evaporated. Raise the heat to medium-high, add the broth, and bring the rice mixture to a boil.

Cover the Dutch oven and transfer it to a preheated 425F oven. Bake the risotto for 50 to 60 minutes, until the rice is just tender. Meanwhile, steam the asparagus, peas and bell pepper for 4 to 5 minutes, until they are crisp-tender. Fold the steamed vegetables, parmesan cheese, parsley, chives, lemon zest and pepper into the risotto