I am damned if I would be stupid enough to try shopping on Black Friday in the States.

Last Friday people were shot, pepper sprayed and trampled. For a few bucks in savings, it ain’t worth it. The pictures on TV were pretty horrifying, and as for taking kids with you, that is even more stupid in my opinion. Apparently Black Friday has now spread to Canada because Canadian retailers don’t want shoppers crossing the border to spend their money. However, this time anyway, shoppers were well behaved and lined up for their purchases. Long may it last, I thought only sharks got that frenzied. I wonder if these people are ashamed of themselves afterwards??

Having said I wasn’t too enamoured of pomegranate alias (seeds) Saturday morning my blood sugar readings had dropped considerably, so now I am wondering if that was due to the pomegranate.  Later on Saturday morning, having put the alias in the fridge (fruit flies) I tried a few and they were horrid. Sour as all get out. I ended up throwing them out. So I guess that’s the end of my little research project.

What a pity, after a tradition of 80 years, the cat, Matilda, 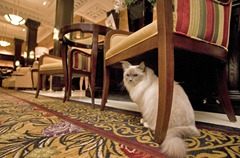 belonging to the Hotel Algonquin in NYC has been banned from the lobby. The city health people have said that pets are not allowed where there is food and food is served in the lobby. So now the cat is on a leash behind the desk or kept upstairs. I know health concerns are important, but its amazing how many fascinating traditions have been set aside in the name of health. Matilda is the 10th cat since 1932.

In the last few years a Pharmacy school building has 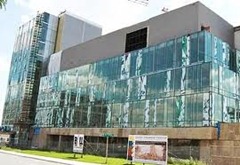 been erected in Kitchener, where I live, and has been open for a while now. As an aside, I think it is a hideous building, the principal of the coloured glass is good, but the place ended up looking bitty and untidy and not the least bit attractive in my opinion, the lowest level is some kind of marble, I think, and once again, very bitty. That apart, I noticed, passing it the other day, that the acres of glass are shining and incredibly clean looking and it crossed my mind to wonder if they had been covered with a nano coating which achieves exactly that - keeping glass clean. I have certainly never seen anyone cleaning the glass, it would be a full time job I think. Come to think of it, there are many buildings, particularly in Toronto, these days which are more or less completely glass. I would think they would have to have nano coatings.

I mentioned we had bought some Brie – we started 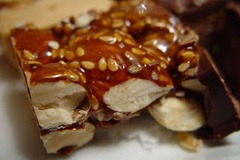 it for supper on Saturday and it was delicious. We also opened one of the packets of Turrón, the chocolate one, does that surprise you? It was absolutely scrumptious, but it wasn’t Turrón as I know it which is made from almonds and honey etc. This was just chocolate and almonds, not that I am complaining you understand, actually the chocolate is to die for. It has a 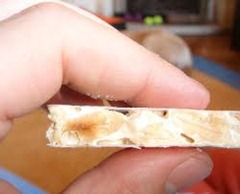 sell by date of Nov. 2012, Matt says it won’t last past next Tuesday or Wednesday. How unjust. The second picture is how I think of Turrón – this is called duro which means hard in Spanish. I have just found a website about El Almendre Turrón which talks all about the different varieties. It also tells you the history of the origin of the sweet. I didn’t realise it was first made in the Alicante area which is where my parents lived for a number of years.

Mentioning 2012 there is a renewal of prophecy,

supposedly found on a Mayan calendar stone from one of the ruins which they say forecasts that the end of the world will be on December 21st or maybe 23rd, 2012. As they pointed out on GMA, Sunday, none of the other prophecies have amounted to anything so not really something to get worried about. In fact as newsman Ron Claiborne pointed out, December 21 is a Friday so they’d get the weekend off.

I have a suspicion that I would like these banana bars as much as I like carrot cake. Maybe you will too. 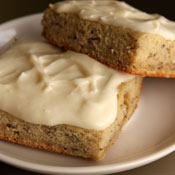 For the Banana Bars:

FOR THE BANANA BARS:
In a mixing bowl, cream butter and sugar. Add eggs, sour cream and vanilla. Combine flour, baking soda and salt; gradually add to the creamed mixture. Stir in bananas.

Spread into a greased 15-by-10-by-1-inch baking pan. Bake at 350 degrees F for 20-25 minutes or until a toothpick inserted near the center comes out clean. Cool.

FOR THE FROSTING:
In a mixing bowl, beat cream cheese, butter and vanilla. Gradually beat in enough confectioners' sugar to achieve desired consistency. Frost bars. Store in the refrigerator.