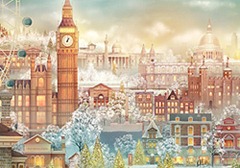 Jacquie Lawson have now issued their Advent Calendar for 2011 which is based on London scenes. I really enjoyed the one last year so have downloaded this year’s too. You can also send copies to your friends so they too can enjoy opening the windows for the whole of December and no, you cannot peek and no, I am not affiliated with them. The calendar starts on Dec. 1, so get one now.

A very odd story, Greg Flanagan has accused a

poll worker, in Ohio, of trying to bit his nose off. What a funny thing to do when you are attacking someone. Tyson once tried to bite off someone’s ear which was odd enough, but someone’s nose, weird. It started with a head butt, but I still think its very peculiar.

As you may remember, I recently read the last book in Jean Auel’s Earth’s Children series, it was called The Land of the Painted Caves and covered a lot of inf

ormation on the caves in France which are full of rock paintings done some 30,000 years ago. I just rented a documentary Cave of Forgotten Dreams which showed pictures of one particular cave which, due to a massive rock fall, had been hidden for over 25,000 years and where the paintings were in pristine condition. The picture shows a map of the extent of the area. The cave in the documentary was the Chauvet-Pont-d’Arc and the documentary brought to life all the things I had read in the book. Absolutely fascinating drawings of the animals of the time plus on the ground were skulls of cave bears which had once occupied the caves and made scratches on the walls. I downloaded the movie from iTunes and if you are at all interested, recommend you watch it. Amazon.com also have it for sale.

The local radio do the remembrance ceremony very well, first we got half an hour of poems (John Geilgud reciting) and songs themed for remembrance. Next we got the Last Post for one minute then total silence for the second minute. After that they recited In Flanders Fields followed by Vera Lynn singing war songs. To most British she epitomizes the war years. A friend took her young son to Ottawa that day to see the ceremony live. Sadly not enough people take notice of the occasion any more.

We regularly have Chapman’s frozen yogur

t as a dessert; it is a Canadian company and they make a good product. The other night, for the first time we tried their Nanaimo Bar. It was a pretty good approximation of a Nanaimo Bar flavour and we both enjoyed it. We

also bought what I call Chocolate Profiteroles from M & M Meats although they call them Chocolate Hazelnut Cream Puffs. Haven’t tried them yet, but they look delicious. What the hell, it saves cooking. Of course I shouldn’t be eating dessert anyway.

How’s this for a deal today, three recipes in one. They are also low calorie and will make up for all the stuffing I have done in the previous paragraph,  but its chocolate!!!!!!!

WebMD Recipe from EatingWell.com
Cream cheese and pesto make a delectable filling for lean chicken breasts. Use this technique to experiment with other fillings as well, such as ham and cheese or goat cheese and chopped olives.