It just shows you: when you buy a Lottery Ticket here in Ontario and then have it checked by a ticket

vendor, most of them ask you if you would like the ticket returned, I always say ‘no thanks’, but maybe, according to this story, I, and others like me, should be a lot more careful. You can’t be 100% certain the store isn’t lying about your ticket. It appears the thieves in this case have hidden their money pretty well in fairly untouchable places but the OLG, the Ontario Lottery and Gaming Corporation, are trying to recover $12.5 million. Some hopes.
Another story in the news is of a couple who travel south every winter from BC and who take out medical insurance for their trip. They have now been lumbered with a $50,000 bill because the

insurance company said something was wrong on their application forms and so they weren’t covering them. Amazing how they said this once they were asked to cough up; I must admit they have returned the premium of $694. Not bad, have your premium back so we don’t have to pay the hospital bill. It turns out the couple have trouble understanding English and don’t read it (now this I don’t understand, if they live in Canada and have citizenship, they are required to have a working knowledge of either French or English) so the application forms were filled with the help of an insurance broker who asked them the questions. Nevertheless I think there is something rotten in the province of BC.
The new $100 bill

is now in circulation as of yesterday. These bills feature the very latest in anti counterfeiting technology; in 2004 counterfeiting peaked with 470 fake bills for every million in circulation. I am assuming they mean $100 bills, but I could be wrong. Luckily it’s not something we personally need to worry about too much, the rarity with which we ever see $100 bills makes it unlikely to be a problem for us.
Yet another horrific story of Muslims killing their children, in this case 3 daughters and one of his wives. He said they had betrayed Islam. If you wish to live this way, you should stay in your own country, not come to Canada or other western civilisations which do not countenance the laws by which you wish to live. I have no doubt these girls were contaminated by our civilisation, but who brought them here in the first place? The police have a wiretap of him stating, the day before they arrested both he, his remaining wife and his son for killing the rest of the family. that his daughters had betrayed Muslim beliefs. I have read the Qur’an and I think these people should go back and do so themselves, nowhere does it advocate the wholesale killing of family members. Basically, in my opinion, these people are just thugs and killers.
I concur with everything said in the lead up to this recipe. I think Broccoli Rabe is a very much under appreciated vegetable, and I love white beans. Guess who will be trying this in the near future?

By The No Meat Athlete
WebMD Recipe from Foodily.com 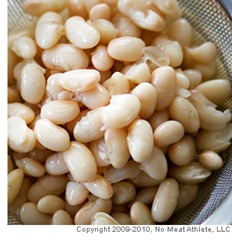 Of all the types of cooking I've played around with, my favorite by far is SIMPLE Italian. To me, there is something sublimely alchemistical about turning a few plain ingredients into something warm and comforting. Not to mention fast! This recipe definitely fits the bill. Broccoli rabe is the star, a bitter cousin of broccoli that so many people overlook. To use, you just need to remove the thickest bottoms of the stems; the rest of the leaves and stems go into the pot. The broccoli rabe accents white beans, a staple of simple Italian food that turns the meal into a main dish for vegetarians by adding some substance and a decent helping of that protein thing.

In a saucepan of boiling salted water, cook the broccoli rabe until tender, about 5 minutes. Drain and run under cold water, then coarsely chop.Set aside.
In a large skillet, heat the oil over medium heat. Add the garlic and cook for 30 seconds. Stir in the beans and the rosemary, then add the cooked broccoli rabe and season with salt and pepper to taste.
Cook, stirring, until the flavors are well blended and the mixture is hot, about 10 minutes. Serve immediately
Adapted from "1,000 Vegan Recipes" by Robin Robertson (Wiley & Sons)
Total Servings: 6