I have been complaining for years about the product sold as turkey in most delis, I call it plastic turkey. I have just seen someone else label it extruded meat and ask what part

of the turkey is shaped like a football. I have tasted the stuff and to me it is totally tasteless. Last time I was in the UK at Christmas I was impressed to see real honest to goodness turkeys being carved up in the deli. Why can’t we do that here. Maybe they only do that at Christmas in the UK, but even so…..

At least I bowled fairly well yesterday. I wasn’t sure if I would be able to do so as I couldn’t complete one game on Friday. At least I didn’t hear any horror sto

ries of the kids out on Hallowe’en either so I gather locally, at least, all went well. We never see anything of it because we live on the 5th floor; the Super and his wife give out all the candies and deal with all the ghosts, witches and goblins – not to mention zombies and other horrid things. Getting less and less pleasant these days. There was one house down the road which had the whole of their front yard covered in gravestones with a skeleton in a tree and who knows what else.

I have been planning to make some Tourtières but I do so with a mixture of meats and have been having trouble getting ground veal. Today I ordered some which we will pick up Friday afternoon, the store is near the bowling alley. I can’t believe I had so much trouble with ground veal, never have before. Yesterday we went to Vincenzo’s, the wonderful deli 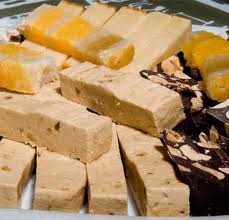 store I have mentioned before, and bought some cheeses as well as putting myself down to be called in roughly three weeks when they receive some Turron which is a wonderful product of Spain and consists of almonds and nougat as a starter. Had to give my name to the cashier and she insisted on calling it Turoni and spelling it Turone.  Checking it can be Turrones for plural or El Turrón. I can buy it on the internet, but its not cheap and as they want $14 to ship it, that makes it cost prohibitive.

How very odd. I have been thinking about a recipe I used to make years ago called Pigs in Blankets. I hunted on line both in the UK and elsewhere for a recipe and cannot find the one I used to use. I still have the recipe but the picture is black and white. All the recipes I can find are either sausages wrapped in pastry of some kind or cocktail sausages wrapped in bacon. Neither of which are like my recipe which came from Cookery in Colour which was the second recipe book I ever owned, it doesn’t say when it was printed, but I have had it since about 1962 and a girlfriend had it before that date as she recommended it to me. I used to have Guy Fawkes parties – we didn’t usually celebrate Halloween – and would often serve these, I used to do the baked potato version.

Streaky bacon, by the way, is the kind of bacon we, in North America, get all the time.

Allow 2 medium-sized potatoes and 2 sausages per 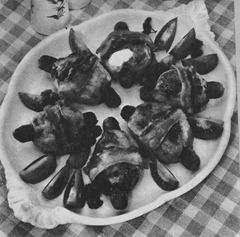 person together with a rasher of bacon. There are two ways of cooking this recipe. One is to peel the potatoes thinly, make a hole in the centre with an apple corer and insert the sausage. Season lightly, then roast in hot fat until both potatoes and sausages are golden-coloured and tender. Wrap 1/2 rasher of streaky bacon round the potato and cook for a further few minutes. The second way is to retain the skin on the potatoes, make a hole in the centre with the apple corer, season the inside of the potato lightly, put in the sausage and bake the potato in its jacket in the usual way. When the potato is just soft, wrap the half rasher of bacon round the outside and complete the cooking. Garnish with tomatoes and parsley.