Well, that was quite an experience. I didn't get some of the things I ordered and the replacements I was offered weren't really what I wanted. I did get a packet of toilet rolls though! Absolutely no chicken thighs and no rice. Both of those items were delivered to me, along with Matt's cereal, by ladydog. She had extra chicken breasts and buys rice by the ton as far as I can tell. She came all the way from her home to take me to the store to pick up my groceries which cost her gas but saved me delivery charges. I had phoned the VSM and they didn't have chicken breasts either but I ordered some brisket from them as I want to try an Instant Pot recipe I have. When we got there, there was a young lady outside with a table full of sanitizer and gloves. We were asked to wear them in the store. Excellent idea. It was incredible, the meat department was almost empty but having ordered the brisket I was OK, also the sirloin steak had just arrived so I bought some of that and I saw they had about 8 Italian sausages left so I bought those too. No other sausages left in the place and not much of anything else.

I can't believe that today was St/ Patrick's Day and because of this damned virus, all the pubs in Ireland were closed. Most other places too I gather. I can't imagine Ireland with closed pubs. I hope everyone was well stocked up at home. The PM of Ontario made an announcement which ladydog and I heard around lunchtime, no meetings of more than 50 people (still too many in my opinion) all the public meeting places to be closed, even churches, theatres and cinemas. Basically the only things open are grocery stores and gas stations. Not only that, gas is down to 96 cents and I thought I was doing well the other day when I got it for $1.02. Of course I now have plenty of gas and nowhere to go. I have been forbidden to go anywhere by ladydog who is turning into a bossy young lady. I said how come she could go out and about, the answer was because she was younger, by about 10 years if you please.

I have mentioned ladydog lives quite a distance away from me and shops at a grocery store a long way from here. I couldn't get Becel which is (or was) a totally Canadian margarine and quite a healthy product. I phoned them and they have tons of the stuff. Their dairy manager ordered extra he said. He couldn't believe I was making enquiries until I told him where my friend lived. I have spent a lot on shopping this week, especially having gone to VSM. Mind you, we won't starve for a long time.

I got this in my email today and thought it sounded good. I have the brisket and I think everything else. One thing I am surprised about is the chicken stock, surely a good beef stock would be better. 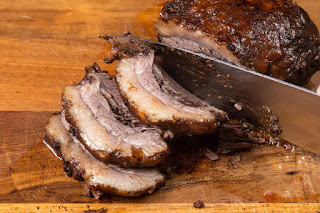 1. Dry Rub Brisket: In a glass mixing bowl, mix dry rub ingredients together. Rub the dry rub mixture on the brisket, then let it marinate for at least 2 hours (preferably overnight, so the salt can penetrate into the meat).

3. Thicken Homemade BBQ Sauce: Carefully place cooked brisket on a chopping board and let it rest. If desired, use a fat separator to remove the oil from the BBQ sauce. Bring the BBQ sauce back to a simmer by pressing the "Cancel" button, then "Saute" button. Mix in 1 cup (250ml) ketchup, 2 tbsp (30g) Dijon mustard, and 1 tbsp (13g) brown sugar in Instant Pot. Let the BBQ sauce thicken by simmering for 8 - 15 minutes. Stir occasionally. Taste and adjust the seasoning with more salt if necessary.

4. Serve Instant Pot Brisket with Yummy BBQ Sauce: Generously brush the addictively yummy BBQ sauce all over the brisket. If desired, use a blowtorch or oven (broil) to slightly caramelize the BBQ sauce on the brisket. Slice your brisket against the grain to maximize tenderness. If you didn't marinate the brisket long enough, sprinkle some salt on the sliced briskets to season them better. Serve with the awesome BBQ sauce. Your delicious & beautiful BBQ Brisket is ready to serve! Enjoy~