So, my wonderful Instant Pot kinda let me down Saturday night. I was cooking sirloin steak for supper and had put some broccoli in the Pot. Once done, I turned it off and released the steam but the pressure valve wouldn't drop. If it doesn't drop you can't get the lid off. In the end, we didn't get broccoli for supper. I then went on line and discovered this was not unknown and that once in a while they do stick, possibly improper lid washing I think, and the way to get them to drop is to push on the valve with something like the end of a pen. Worked a treat. The broccoli was a nasty colour by now, so it ended in the garbage and later I washed the lid as thoroughly as possible and pushed the valve up and down to be sure it wasn't sticking. Of course if it happens again I will know what to do.  We enjoyed supper even if we couldn't eat broccoli. I had made a nice sauce which would have gone well with it too.

I'm an idiot. I looked at my smart watch at around 5 in the morning and figured it hadn't changed itself. When I got up, I looked at all kinds of things on how to change the time, and got the watch to show the time quite a number of times. It then occurred to me that the time it was showing me was the correct one after all. It had changed itself. Duuh. Maybe I hadn't woken up enough.

I have been meaning to tell you about my current read, The Elephant Whisperer. Absolutely stunning in its telling and sympathetic understanding of elephants and many other animals. Mainly elephants. The author, Lawrence Anthony, bought an animal reserve and then was given a herd of seven elephants who had been very troublesome in their previous home. There had been 9 of them but two had been shot which traumatised this troupe even more to see their Matriarch and her youngest baby killed in front of them. Once or twice the book has had me in tears because of the dreadful things we do to elephants and other species. Other times I have laughed at the incredible things the elephants do. I cannot recommend this book enough  Anthony was brought up in Africa and his reserve is in Zululand - there is a lot about the people of that area as well and his friendship with the Zulu people.

I enjoy Pho and I like Flank Steak so what more could I ask for here? Mind you, a lot of this could be done in the Instant Pot and take a lot less time. Food and Wine have produced a whole lot of flank steak recipes which I haven't yet studied. But I will. 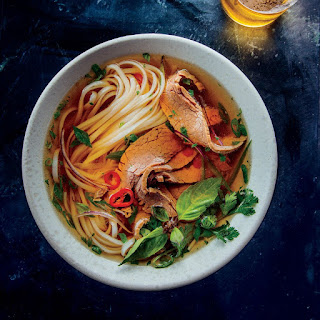 slowly with beef knuckle bones, whole toasted spices, and aromatics. You’ll want to keep a batch of broth in the freezer for an instant, soothing noodle bowl any night of the week.

1. Place bones in a 12-quart stockpot and add cold water to cover by 2 inches. Bring to a boil over high heat. Remove from heat; pour off and discard liquid. Rinse bones under cold running water. Wash pot.

3. Return bones to pot and add 2 gallons cold water. Bring to a boil over high heat, skimming impurities as they rise to the

Author Notes
Broth and steak can be prepared up to 2 days ahead. Place in separate containers; cover and chill.