OK you stalkers. May be nothing on Saturday, I have appalling toothache.

I have written about Pangolin poaching before, but was reminded today that the shy little animal is being poached to extinction. It is actually the cutest little animal and when raised by humans can become extremely affectionate. NOT that I am advocating raising them ourselves, but some have been because they are orphans due to the crass stupidity and greed of  the human race. If I were a billionaire I would contribute large amounts to organisations such as Wildlife Fund, but sadly I am not. 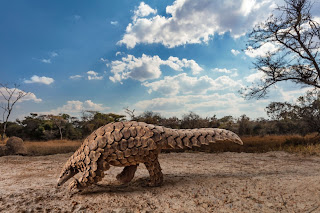 Not much going on during Thursday. Picked up a few items from the store but they didn't have the paper towels I wanted. Apparently they are on special so they ran out. Got myself a rain check. I could not think of that phrase. Felt a bit stupid explaining it.

One thing, my new Air Fryer arrived. Since I phoned and complained, my present one hasn't cut out once. Typical. I think I will put the new one in the cupboard until the old one does give up the ghost.

My newest Cannabis order arrived. I have been taking a half measure of a stronger oil. I feel as though it isn't working nearly as well, our foot nurse suggested if I felt that, I was probably right. The capsules are a possible for next time because the bottles are tending to leak which isn't funny, bearing in mind the price. If only our government would give it a Drug Identification Number, maybe our insurance would pay for it. Matt could probably use it too, but, no way we could afford it for both of us, can't really afford it for one of us.

Friday we both have urologist appointments. I checked where their new location is, on the way to the asparagus farm,  I was thinking about going there afterwards, but I still have quite a lot left, be stupid, wouldn't it? Although I could start canning some.

The Québecois invented Poutine which to me goes to prove they don't have the gourmet instincts of the French in France. The thought of French Fries dolloped with cheese curds and gravy really turns me off. I like my Fries crispy so don't want them in any kind of sauce or gravy anyway and I am not too keen on any gravy I have ever tasted (still time) other than my own. So, when I came across this recipe for Asparagus Poutine I felt like throwing my hands up in horror. This from a blogger who usually makes pretty good food. However, I know there are people out there who enjoy Poutine and might even enjoy this travesty. 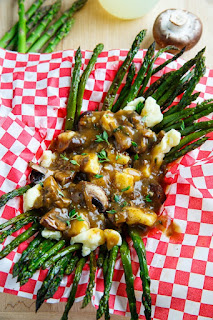 2. Meanwhile, toss the asparagus and mushrooms in the oil, salt and pepper, place on a baking sheet in a single layer and roast in a preheated 400F/200C oven until they start to caramelize, about 20 minutes, mixing half way through.

3. Meanwhile, melt the butter in a pan over medium heat, add the chopped mushrooms and cook until they start to caramelize, about 5 minutes.

4. Add the shallot, garlic and thyme and cook for a minute.

5. Mix int the flour and cook for another minute before mixing in the broth and soy sauce, seasoning with salt and pepper and simmering until it thickens, about 5 minutes.

6. Plate the roasted asparagus and mushrooms, top with cheese curds and hot gravy and enjoy!