Matt's thigh doesn't seem to be getting any better. He is having knee problems which I think might be causing this. He basically is unable to do anything much at all at the moment. I even have to help him with dressing and undressing. If we don't hear anything from the doctor soon, I think a hospital visit is in our future. So don't be surprised if blogs are missing next week.

Just found this recipe, sounds good. I don't keep chile peppers as such though.

The trick to this citrusy stir-fry is to get your pan roaring hot before adding the ingredients, which 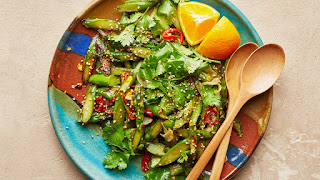 1. Heat a large skillet over medium-high until hot, 3–5 minutes (a drop of water should jump around in the pan). Cook chile, garlic, and oil, stirring constantly, until oil starts to shimmer and garlic just begins to turn golden, 60–90 seconds. Immediately add asparagus; season lightly with salt. Cook, tossing occasionally, until asparagus is just beginning to brown around the edges, about 2 minutes. Add soy sauce, butter, and 1 Tbsp. water and cook, tossing constantly, until asparagus is still crispy yet cooked through and coated in sauce, about 30 seconds longer.

2. Remove pan from heat. Finely grate zest from one-quarter of orange over stir-fry. Squeeze juice from one orange half over and toss once more.

3. Transfer asparagus mixture to a platter. Top with cilantro and sesame seeds. Taste and squeeze more orange juice over if needed.