Didn't  mean to write a blog today, but ... had a bit of a scare this morning. Checked yesterday's mail and found our insurance for the car. Went to put it in my wallet and realised I still had the temporary license which I had been given last September and never received the proper license. The temporary one expired last December meaning I have been basically driving without a license for 5 months. No idea what would have happened if I had been stopped. Luckily the Service Ontario office is just round the corner from us so I went haring to the office and was somewhat miffed to have to pay $35 because I hadn't renewed it before it expired. Apparently I should now get my license by August 15 (my mother's birthday) and I was warned that if it hadn't arrived by the beginning of August I should go into the office again otherwise I would be shelling out another $35. Tees me off though, wasn't my fault. Apparently it was mailed to me before and it wasn't returned to them so who knows what happened to it.

After lunch we went to the urologist who has just moved into new offices. Somewhat further away than the old ones. Nice place though, although they are not yet settled in. Huge reception area and the consulting rooms are much bigger, the urologist was delighted with the space he now has. Also, very important, parking is free. Turns out Matt's kidney stone is still there so it has been arranged that he will go have the thing "blasted" in June unless it decides to leave him before then. I had to use the bathroom on the way out, quite luxurious.

As the doctor's was about half way there, I decided to go on to the asparagus farm. I got a $10 bag (just over 2 lbs) and a couple of $5 bags which I thought some of my friends might like. I was right, they did. We had some for supper together with the coconut shrimp I bought at the local market store. One friend is a rhubarb nut too but it wasn't all that great yet. Maybe next time.

This looks pretty yummy. Don't remember ever trying it, must do so. 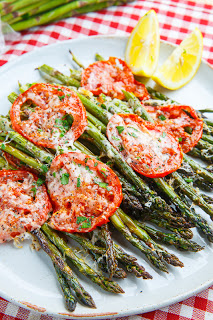 Toss the asparagus and tomatoes in the oil, lemon juice and zest, salt and pepper, place the asparagus on a baking sheet in a single layer with the slices of tomato on top, sprinkle on the parmesan and roast in a preheated 400F/200C oven until they start to caramelize, about 15-20 minutes, mixing half way through.