Phoned Community Support again this morning, I can't believe they can get me a driver whenever I want one to go to the hospital, but although other people do, I cannot seem to get one to help me with my shopping, well collecting it and bringing it upstairs at least.

Don't think I mentioned that one of the Community Support Drivers told me there was a good Thai restaurant "just up the road" literally, from where we live. ladydogj and I decided to go try it today although Matt wouldn't try and go with us. She arrived around 11:30 and told me off because I hadn't written a blog! It's one of her ways of checking up on us.

Left about noon and went to the Pho Tran Restaurant. Their menu is enormous but eventually we both settled on Pho (soup) and some spring rolls. I had a shrimp and noodles pho, I think ladydogj had beef in hers. My only complaint, in a big soup bowl, the shrimp had their tails on. Grrrr. However, the pho was delicious as were the spring rolls. Took some of those home with me for Matt. It was really nice to get out again and have a girl chat (OK old lady chat) yes, I know ladydogj, you aren't as old as I am.

I needed to go to the liquor store, turned out ladydogj did too so she took me to one close by, I had completely forgotten it was there, it is such a small store.

Home again and Matt had eaten the lunch I left for him so saved the spring rolls for supper. That is what we had, I warmed them in the air fryer. I also decided to cook some pot stickers so during the afternoon I prepared my "dip" which I know Matt enjoys. I made a double whamo today and have saved some for another day.

ladydogj uses her Instant Pot to cook ribs. I have never cooked ribs but I am going to give it a go. Neither of my husbands like "bones" although I love them.

Fall Off the Bone Ribs in 30 Minutes!

Instant Pot makes the ribs fall off the bone tender, and the boiler or grill finishes them off with a beautifully caramelized crust. Pick a barbecue sauce you love – whether it’s store-bought or 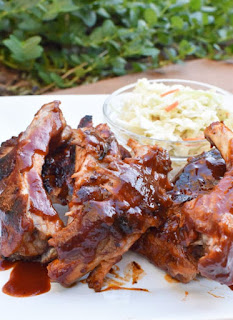 homemade, any sauce will do!

1. Liberally salt and pepper both sides of slab of ribs. Cut slab in half if it's too big for your Instant Pot.

2. Pour apple juice into Instant Pot. Place ribs into pot, drizzle with 1/4 cup of BBQ sauce and secure lid. Make sure it's set to "sealing."

3. Set it to Manual timer for 25 minutes. It will take a few minutes to heat up and seal the vent. Once timer counts down, let sit another 5 minutes then release steam by turning valve to "venting." Turn on oven to broil (or heat your grill) while you're waiting for the 5 minute resting time.

4. Remove ribs from Instant Pot and place on a baking sheet. Slather on both sides with remaining sauce.

5. Place under broiler (or on grill) for 5-10 minutes, watching carefully so it doesn't burn. Remove and brush with a bit more sauce. Pull apart and dig in!