Just a quickie as I am running late tonight.

Matt woke half crippled with his thigh today (Tuesday). He is going for Xrays and things on his knee on Wednesday. He had an Xray on his kidneys and bladder today. He didn't want to go to Red Lobster so I ended up ordering through a company called DoorDash who specialise in food deliveries from restaurants. My friend could have picked up the order but thought it would be too heavy. In fact it wasn't so spent money on delivery which wasn't necessary. Live and Learn. Still the meal was good and we all enjoyed it. Later I sat down to write this and discovered a message from the bank saying they thought my credit card had been compromised and to call instantly. I did so, amongst some of the security questions I was asked was where do I work. I said I'm 80 I don't work and haven't done so in years. Really! Anyway, turned out they were worried about DoorDash and whether I had authorised it. Nice to know they are on the ball. Bit scary at first because I did have a spam call purportedly from my bank whilst we were out today. I checked with the bank and they assured me there was nothing wrong and they wouldn't have called.

Think I should get a commission from Instant Pot, I have convinced my friend she too needs one. 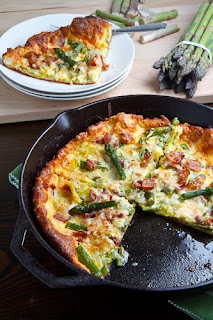 1. Bring a pan with 1 inch of water to a boil, add the asparagus and cook until it turns bright green.

2. Rinse the asparagus under cold water and pat dry.

3. Cook the bacon in a cast iron skillet over medium heat, and set aside on paper towels to drain reserving the grease in the pan.

4. Add the leeks to the pan, saute until tender, about 2-4 minutes, set aside and turn off the heat.

5. Add the butter to the skillet and let it melt.

6. Mix the milk, eggs, flour, salt and pepper and pour it into the pan.

7. Sprinkle the asparagus, bacon, leeks and the cheese over the batter in the pan.