I know nothing about the Superbowl and am glad it's over although I guess it will be talked about for a while. I used to occasionally watch the ads but understand from several people that they weren't worth the trouble either. Having lived in the Carolinas I kind of wanted them to win but... Not that much. I got a description of football from A Beer for the Shower. They called it a hand egg being carried around by sports teams. Good one guys.

The sport in which I do take an interest, bowling, went pretty well today. My average increased a tiny bit, but at least that meant I had reasonable scores today. One of our team was bowling like a demon for two of her games. She was really racking up the scores. We had a few moments silence for one of the league members who recently died, somewhat unexpectedly too.

Bit of an upset this morning, I called the pest control people and told them I was not impressed. They called the super's wife who said they had told her I was not to call them any more and it was all to be handled through the super or building management. Now we don't know if they are coming Wednesday or Thursday. If they come Wed. we will be here and not ready to leave. This may be the realtor's business but the realtor is not having to live with these conditions. I read an article given to me today saying bed bugs are living fossils. I would like to ensure they are no longer living fossils. If I won the lottery I would walk out of here and leave everything behind. Being pensioners, we are stuck with it.

Tuesday morning we have to go to the dermatologist again. Think there might be more skin cancer. If

only we had known, as youngsters, what we know about sun today. Even now, getting Matt to use sun screen is almost impossible. One benefit of the trip (it's in the next town) is that at the bottom of the building is a British Store which sells great Cornish Pasties so, guess what we will be having for supper tonight? These are meat and vegetable pies as made in Cornwall, England. Actually, in some parts of Cornwall, they call them oggies!

Having discovered this recipe today I think I might be making it soon. Marsala does give a delicious flavour to stews. 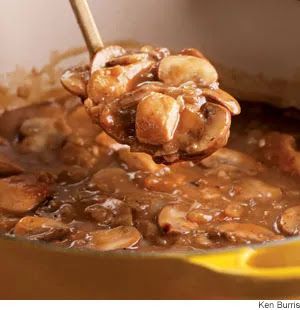 This Marsala chicken stew recipe gets its richness from plenty of mushrooms and onions. Make it a meal: Soak up all the saucy goodness with whole-wheat egg noodles and serve with a green salad.

Tip
Tip: Marsala, a fortified wine from Sicily, is a flavorful addition to many sauces. Don’t use the “cooking Marsala” sold in many supermarkets—it can be surprisingly high in sodium. Instead, purchase Marsala that’s sold with other fortified wines in your wine or liquor store. An opened bottle can be stored in a cool, dry place for months.
This recipe comes from Web MD.