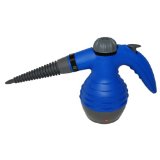 Well I ended up with something of a ding dong with the super's wife this afternoon (Tuesday) with the result I have said screw it and ordered myself a hand held steam cleaner. What really teed me off was her telling me I could not have been told something by the exterminators because they didn't tell anyone else the same. Nothing infuriates me more than being told something couldn't have happened when it did. I don't know what they will do about our existing bugs, but once I get my steamer I don't give a damn. It is recommended for bed bugs and costs about $50 all told. Turning out to be an expensive proposition all told.

Did you pick up on the comments yesterday when JoJo Earle said she had been told to buy cheap clothes to go to Disney which she could abandon there and buy more to come home again. All because of bed bugs. I can't believe that. I do of course, because JoJo said so. What about the bites whilst you are there? I think, to me, the biting is the worst because it is an invasion of my bed, my comfort zone, etc.

Anyway, I was so teed off tonight that we went out for supper. Chose the Souvlaki Flame which I

mentioned a couple of weeks ago. We started with a serving of Dolmas (stuffed grape leaves) between us which were served in avgolemono sauce (egg and lemon) delicious. We both had souvlaki, me pork and Matt chicken. It came with a salad, rice and roast potatoes. Matt could teach them a thing or two about roasting potatoes, but they tasted good. It was very enjoyable, especially as I didn't have to cook. Decided to have some baklava after. Mistake, it was tasty but very dry. I told the waitress and she said she would pass my comment on. I hadn't realised before but they do take out and the waitress, Jamie, gave me their take out menu. They are just along the road from us, so useful. Not that we eat out or do take out that much but....

So, now, we are having a drink. I need one. We also watched On the Waterfront. Haven't seen that in many a long year. It really was a good movie. Didn't realise Frank Sinatra was originally slated to play the Marlon Brando part.

Lasagna was never a biggie in the UK for us, or for anyone I knew. Not like it is in North America. I have only ever made one once I think. However, I did like the sound of this. 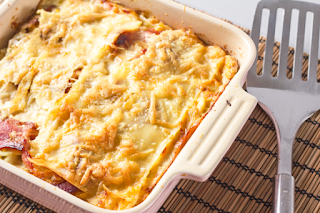 DIRECTIONS
In skillet, cook bacon until crisp.
Remove with slotted spoon to paper towels.
Drain, reserving 1/3 cup drippings.
In the drippings, sauté onion until tender.
Stir in flour, salt and pepper until blended.
Gradually stir in milk.
Bring to boil and cook and stir for 2 minutes.
Remove from heat.
Spread 1/2 cup sauce in greased 13x9x2" baking dish.
Layer with four noodles, a third of the egg and bacon, cheese and sauce.
Repeat layers twice.
Sprinkle with Parmesan cheese.
Bake uncovered at 350°F for 35-40 minutes or until bubbly.
Sprinkle with parsley.
Let stand 15 minutes before cutting.
*Can be made the night before and refrigerated.
To serve, remove from refrigerator 30 minutes before baking.
Bake as above.
Have a great day