Bowling, This 'n That, US Elections,

Sorry I missed out on the Lost and Found Blogfest. Being somewhat bugged out, I completely forgot it. I haven't finished reading everyone's stories,  but I did read some very good ones.

Bowling this afternoon. I had one good game, but we were trying out something different and I found it a bit hard on my hip.  By the third game I was in quite a bit of pain. We usually bowl one frame at a time, but other leagues do two at a time. Someone suggested we try it, we did, but nobody was in favour. I do wish our previous orthopaedic surgeon wasn't retiring. I bet he would have treated me much sooner than anyone else. I don't understand why hip replacements always take forever. Maybe it's because they do so many. At the hospital I am probably going to attend, I know they have several surgeons but it doesn't seem to be enough.

I am thinking I may not be blogging every day for a while. Not doing a whole hell of a lot so not going to have much to write about. We'll see how it goes, but don't be surprised if there is no ramble from me any morning. Besides, I have been working on my A to Z posts. Got a few of them completed.

Of course in the States the Iowa caucus on very much on people's minds. By now the results will be known. I think a lot of Canadians are also watching this election campaign with interest too. Incredibly Matt has decided Trump would be a good president. At least he knows how to handle money and how to make the stuff too. Always a useful thing in a leading politician.

Crime of the century, I don't eat burgers. However,  this one appealed. I just might enjoy it.  I had never heard of Comté cheese so I Googled it. Sounds like one I should try. With all that on it, I bet it tastes really good. 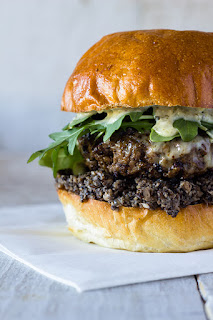 1 lb. medium ground beef
salt and pepper
4 hamburger buns
1 cup finely grated Comté cheese
1 cup arugula
Method
For the duxelle, pulse the shallots and garlic in a food processor until finely minced. Heat butter in a large skillet over medium heat. Add the shallots and garlic; cook 3 minutes until soft. Pulse the mushrooms in the food processor until finely chopped. Add the mushrooms to the skillet with a pinch of salt and thyme. Cook, stirring frequently, until the mushrooms have released their liquid, about 15 minutes. Season to taste with salt and pepper.

For the burger sauce, add the ingredients to a food processor. Process until well combined. Refrigerate until use.

Divide ground beef into four portions. Season with a pinch of salt and pepper. Form each into a ball then flatten into a patty. Season well all over with salt and pepper. Heat oil in a heavy cast iron skillet over medium high heat. Cook 2 burgers at a time until well browned, about 3-5 minutes. Flip and cook another 3-5 minutes. depending on desired doneness. Repeat with remaining burgers. Top with cheese, cover and let steam until cheese is melted. If desired, toast buns.

To serve, top bottom bun with duxelle, a burger, and arugula. Spread burger sauce on top bun and enjoy!

Email ThisBlogThis!Share to TwitterShare to FacebookShare to Pinterest
Labels: A to Z, Bowling, Duxelle Burger, Hip, US Elections