I am probably not in the best of moods tonight (I wonder why?) but bearing in mind the things I have been writing about in recent months, over fishing, shooting animals of all kinds for their ivory, illegal animal trades anyway, not to mention terrorist attacks whether instigated by a particular group or just because someone appears to go nuts (London attacks on Wednesday). Then there are the things we can't do anything about like all the super volcanoes out there or the major earthquakes waiting to happen. It made me think that really I am not going to be around that many more years. I know, I could live til 100 but not many people are doing that yet although more and more each year. But really, do I want to?

There are things going to happen that I would like to do of course, but I am too old to be included in such things as manned trips to Mars and the like. A certain president is pushing that I believe. Maybe not such a good idea coming from him.

We did go bowling today just in case I can't cope tomorrow or feel such a toothless hag I don't want to appear in public, grin. Matt won 2 out of three and the third game was a really good one. As I said, why can't he do it on Monday when it counts? Mind you I had one pretty good game so I guess the same applies to me. We were supposed to be bowling downstairs today, but one of the owners decided to make some adjustments to allow us to bowl upstairs as there was a group of handicapped people bowling today and they tend to be extremely noisy. We appreciated that.

One comment from the owner - was I loaded up on yoghurt and apple sauce. No, not much nutrition in those things. Soups, eggs, fish, much better I think. We shall see.

This caught my eye originally because of the use of radishes.

Bone-in chicken thighs are pan-seared before being basted with sticky-sweet sauce and slow cooked to fork-tender perfection. Sear the chicken thighs in batches to avoid over-crowding the pan and hindering browning. Though we swoon over the superiorly moist meat, the real magic lies within the sauce, which masters the balance of savory and sweet. For a burst of freshness, we add a simple cabbage slaw that rounds out the meal with a satisfying crunch. For an extra dose of veggies, pair it with sugar snap or snow peas. Our recipe requires little legwork and saves 300 calories and 250 mg 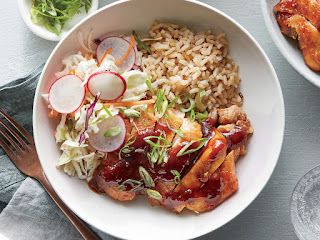 of sodium over the classic.

2. Heat canola oil in a large nonstick skillet over medium-high. Add chicken, and cook 3 minutes on each side or until browned. Place in a 5- to 6-quart slow cooker.

3. Thinly slice green parts of green onions; set aside. Finely chop white parts of green onions; stir together with ketchup, honey, soy sauce, ginger, garlic, salt, and 1/2 cup vinegar in a medium bowl. Pour sauce over chicken in slow cooker. Cover and cook on HIGH for 3 hours, or on LOW for 7 hours and 30 minutes, until chicken is tender and cooked through. Remove chicken from slow cooker; cool slightly. Carefully remove bones from each thigh; discard bones.