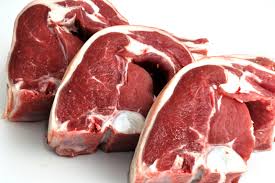 Watching a programme on Saturday night on TV Ontario, it was all about how trains changed Britain in particular in the transportation of food all over the country and particularly to London. The people doing the narration ended up in a big London market where they bought the most beautiful lamb chops I have seen in over 40 years. I wanted to go 'home'. These in the picture look pretty good, but not as good as the ones I saw on TV. The food they showed in the markets, in particular Billingsgate which is a fish market in London, made me long for the foods which were so readily available there. They even visited a guy who smokes herrings to make them into kippers (I drooled) and another man who runs a genuine fish and chip shop. Unfortunately, I understand the old fish and chippers are giving way to the corner Indian takeaway. On this side of the pond there is too much emphasis on production for the masses and not enough on quality and taste. I have talked before about aging meat which is not done long enough in North America as a whole. One can get meat well aged, but as it is a specialty item instead of the norm, the price is astronomical. Another thing they did, was herd some sheep to the station and load them onto the train. There was a sheep dog so I don't think they were totally on their own. I was surprised, the sheep were being transported in an open carriage and didn't seem to be a bit worried at all.

Not a lot going on this weekend. We've been cleaning silver and glassware which is a bind but looks so nice once it's done. Taking it by easy stages, a shelf at a time. We had quite a lot of rain over the weekend and Sunday it was somewhat foggy. They keep mentioning snow on the weather forecast but so far, nothing has materialised round here.

I have just found a site on Cooking Light with lots and lots of asparagus recipes. So I won't have  to 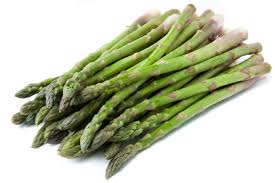 repeat the same 'ol same 'ol although some I will repeat because they are so good. We had asparagus soup tonight, need to use it up as I will soon be making more, I hope. A lot of the recipes I found called for roasting the asparagus. Not my favourite way of cooking it as steamed or boiled it is such a succulent vegetable. A couple I saw were roasted and then a sauce added. Those I would definitely boil for preference. Looking at this picture, hadn't noticed before, the ends are white which shows the asparagus is NOT farm fresh. You never have to snap off the ends with farm fresh asparagus. You can eat the whole stalk.

If you are like me and love carrot cake and pancakes, this is the perfect brunch dish for you - or breakfast or any meal.

Want to have your cake and eat it too? You can (and for breakfast!!!) with these incredible Carrot Cake Pancakes. Drizzled with a cream cheese topping and sprinkled with a vanilla wafer crumble, 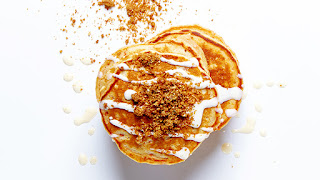 these decadent and fluffy pancakes are the perfectly delicious and tasty way to eat dessert for breakfast.

1. For the pancakes, in a large mixing bowl, combine flour, baking powder, salt, cinnamon and pumpkin pie spice. Set aside. In a medium bowl, whisk buttermilk, butter, maple syrup, brown sugar, eggs and vanilla extract. Stir milk mixture and grated carrots into the dry ingredients. Do not over-mix (lumps are okay in the batter). Let the batter rest while the skillet heats up.

2. Heat a large, non-stick skillet over medium heat. Coat the skillet with non-stick cooking spray. Spoon ¼ cup pancake batter into the hot skillet. Cook until bubbles form, then flip over and cook on the other side until golden. Keep warm in 200ºF oven or serve immediately. To serve, stack pancakes, drizzle with cream cheese topping and sprinkle vanilla wafer crumble over top.

3. For the cream cheese topping, using an electric mixer, beat together cream cheese, icing sugar, milk and vanilla extract until smooth. Can be refrigerated until ready to use over pancakes.

4. For the crumble topping, preheat oven to 350ºF. In a small bowl, combine vanilla wafer crumbs, brown sugar and melted butter. Place mixture on a parchment-lined baking sheet. Bake for 6 minutes and then remove from oven and let cool. Crumble over pancakes.