I am pretty sure I have posted a recipe for Picadillo before but seeing this one in the New York Times made me think I would share it again and maybe make one for us, it's been a while since we last ate it. This dish has so many variations in Latin America and the islands it is quite ubiquitous to the area. I don't think I have seen a recipe with chorizo before.

Picadillo is one of the great dishes of the Cuban diaspora: a soft, fragrant stew of ground beef and tomatoes, with raisins added for sweetness and olives for salt. Versions of it exist across the Caribbean and into Latin America. This one combines ground beef with intensely seasoned dried Spanish chorizo in a sofrito of onions, garlic and tomatoes, and scents it with red-wine vinegar, cinnamon and cumin, along with bay leaves and pinches of ground cloves and nutmeg. For the olives 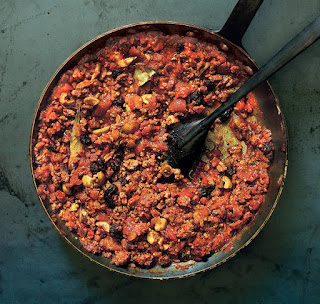 you may experiment with fancy and plain, but rigorous testing here suggests the use of pimento-stuffed green olives is the best practice. A scattering of capers would be welcome as well.

1. Put the olive oil in a large, heavy pan set over a medium-high flame, and heat until it begins to shimmer. Add onions, chorizo and garlic, stir to combine and cook until the onions have started to soften, approximately 10 minutes.

2. Add the ground beef, and allow it to brown, crumbling the meat with a fork as it does. Season to taste with salt and black pepper.

4. Uncover the pan, and add the raisins and the olives. Allow the stew to cook for another 15 minutes or so, then serve, accompanied by white rice.

Email ThisBlogThis!Share to TwitterShare to FacebookShare to Pinterest
Labels: Picadillo