One of the bowling alley owners gave me his cell phone number on Monday so I could text him about whether we would make it on Thursday or not. He wrote it down and later in the evening I went to add it to my cell phone Cell phone? Where is the cell phone. We both hunted high and low Monday night and Tuesday morning Matt checked the car out. I phoned several places, including the bowling alley, to be sure I hadn't lost it there and the owner said it " would be in the last place I looked". We both laughed and then I put the phone down. I thought, where, in fact, would be the last place I would look and went to where I hang my purse when home. Behind it is another purse and guess what, it was in an open pocket of that one!! I had slipped  it into a pocket of my current purse, I thought, but hadn't really done so. Duuuh. I had talked to my provider and they had blocked the phone so then I had to get it unblocked.  As you can see, it's a very simple phone as Matt had trouble with our more advanced phone. He sure isn't into technology. Mind you, we don't use it that much anyway.

It would appear March is coming in like a lamb which, according to the old saw means it should go out like a lion. We did have snow over the weekend but it didn't last very long at all and has all totally disappeared at the moment.

I made the Panchiladas for supper on Tuesday night. I have a few criticisms of the recipe, first the 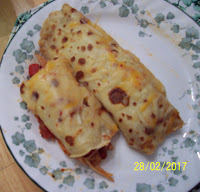 pancake mix they referred one to was way to thick, Would have been OK for American pancakes but not for crêpes. I added quite a bit more milk. Second, there was a lot more stuffing than would go into two pancakes. I ended up with three and could probably have used four. Matt said it was a lot of food as it was, but I thought it was fine. Final criticism, I think it would be as well to heat the stuffing before assembling them. The middle was cool. That being said I really enjoyed them and will certainly make them again bearing in mind what I said.

By the way, I am reading The Green Mile by Stephen King. I love the movie so thought I would try the book. Enjoying it, but it is a tad long winded. I must say I am impressed that they stayed very close to the book in the movie, doesn't always happen as you know. It really is a good book, I have nearly finished it.

Can't go wrong with pork and ginger and peanuts.. 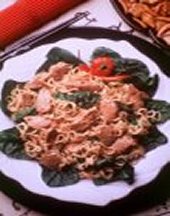 1. Cut tenderloin into ¼-inch slices, cut each slice in half.