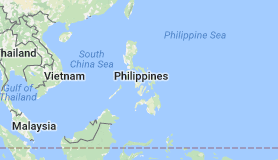 Sorry for missing Thursday's blog, but Wednesday turned out to be a very busy day. First we  have to rush around in the morning because our cleaner comes in at 9 (officially) often 8:45 ish (unofficially) so all ablutions etc. have to be done earlier than usual, for me at least, I tend to hang around on the computer in the mornings. Then of course we had our friend's birthday lunch at Mandarin - Matt would argue, but I didn't actually eat as much there as I usually do. I was delighted they still had dumplings so I had one or two, not many, I promise you. I mainly had a chunk of salmon. When we got home I was involved in getting the soup ready for my friend who was calling in for supper at 5. Only had to defrost it, but being asparagus soup, it always needs to be blended when it defrosts. We also had ham buns and some chocolate wafers after. We haven't seen this friend for quite some time, she is always so very busy. Last year she was sent to Manilla in the Philippines on business and was telling us all about it plus showing us some pix on her phone. Fascinating. I didn't know it was such a dangerous place for visitors, our friend would really stand out too because she is very tall and blonde. Luckily, being there under the company umbrella she was pretty closely guarded. She couldn't stay with us long as tomorrow (Thursday) she was off on a 50th birthday cruise with a girlfriend who is also 50 this year.

I am sorry, I am a tad behind reading other blogs lately. Sorry, I will get there eventually.

Went to see the vascular surgeon who said I have strong pulses at my ankle area and in my groin and asked me if I really wanted to go through an operation etc. etc. It would be perfectly OK to leave it. I said could I go home and think about it, he said sure, just phone. So I'm thinking. I can bowl quite happily, I can't walk far without a cane but... I can't do my exercise class standing. But is any of this enough to warrant an operation?? I am thinking not. Shopping on Tuesday, using a cart of course, Matt said I was racing around the store. No actual time limit on my "thinking", so we will see. Went bowling afterwards and my legs got tired once because I went into the other room for a coffee. Don't usually have to do that. But that was it in 2-3 hours. Not that my bowling was much good mind you.

One thing our friend talked about was the food and how much she had enjoyed it. She used not to be so adventurous, but the first thing she tried was Sisig. I have included a recipe which, I believe is somewhat modified as the recipe used to be chopped pigs face which when you think about it is more or less what head cheese, or in the UK brawn, is. My mother used to make it with half pig and half sheep. I used to love it but have never tried any other than the one my mother made. 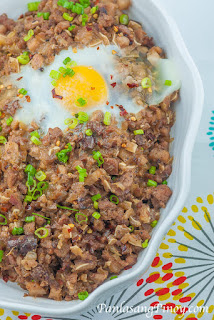 1. Put-in the pig’s ears and pork belly then simmer for 40 minutes to 1 hour (or until tender).

2. Remove the boiled ingredients from the pot then drain excess water

3. Grill the boiled pig ears and pork belly until done

4. Chop the pig ears and pork belly into fine pieces

5. In a wide pan, melt the butter or margarine. Add the onions. Cook until onions are soft.

6. Put-in the ginger and cook for 2 minutes

10. Add salt and pepper to taste

11. Put-in the mayonnaise and mix with the other ingredients

12. Transfer to a serving plate. Top with chopped green onions and raw egg.

13. Serve hot. Share and Enjoy (add the lemon or calamansi before eating)

And this is an English recipe for Brawn. I couldn't find my mother's recipe but I know she often used half pig's head and half sheep's head as I said above. It is a lot of work though. I used to love it but never tried making it. I wonder if one could even buy a pig's head these days, maybe at a farm.

Serve up a classic British dish with James Martin's magnificent brawn made with pig's head, trotters, 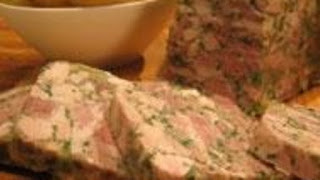 1. leave to cool completely. To check to see if the brine is strong enough, put a potato in it - if it sinks, it's too weak; if it pops up and down, the brine is just right.

2. For the brawn: using a blowtorch, burn any excess hairs on the pig's head - especially around the snout. Leave in the brine for 24 hours.

3. Drain the head and put it into a large stockpot. Cover with cold water and add the ears, trotters, carrots, thyme, sage, bay, cloves and coriander. Season with salt and pepper and slowly bring to the boil, removing any scum that floats to the surface. Simmer for a further 4 hours, topping up with water every now and again if it needs it, until the meat starts to fall from the bone.

4. Turn off the heat and leave to cool slightly. Remove the head and trotters from the pot and peel off the skin. Roughly chop the meat and the ears, and if you have the tongue, remove the coarse outer layer, chop and add to the mix.

5. Add the shallots and parsley and mix well. Strain the cooking liquor and pour a little at a time into the meat mixture, adding just enough to moisten. Line a terrine mould or earthenware dish with cling film and pile the brawn mixture in. Chill in the fridge for 12 hours with a weight on top to push it down. Remove and serve sliced with new potatoes and crusty bread.