I finally figured out how to calibrate the stove. You have to press two buttons at once and I was having trouble giving equal pressure to both and obviously then it didn't work. However, you can only increase it by half a degree at a time. Bit stupid!! Pain in the rear end too. This is not quite the same but the two buttons on the left, top and bottom, are the one's you have to depress.  Later I talked to the guy who was coming to fix it. I told him the stove was no longer under warranty. He said was I going to pay - $80 odd. I said no way. Talked to him about calibrating. According to him I should be able to do so much more easily, oh well. He said the easiest way to do it was just to up the temperature when I was cooking. 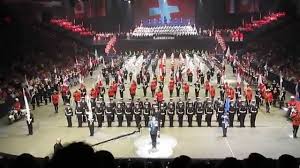 We've been watching the Royal Nova Scotia Tattoo 2016 tonight, dedicated to Her Majesty's 90th.  I remember being taken to the Royal Edinburgh Tattoo in London when I was in my late teens and thoroughly enjoying it. The Scotia one very much celebrates their roots in Scotland and Ireland. Couple of things brought tears to my eyes. A lot about the first world war too. What a waste of time war is. Especially that one. There was a letter from someone's grandfather describing how over 700 Nova Scotians went over the wall and in 30 minutes, only abut 100 staggered back. Why don't we learn?
birthday which actually occurs in April, 21st as I recall because my cousin's birthday is on the same date. I was staying with his family the first time the anthem was played for her that day and they were saying it was for them (he had a twin). I wasn't very old, but I wasn't that young!!

We love stuffed Belgian Endive and here is a new, to me, recipe. Very easy to do. 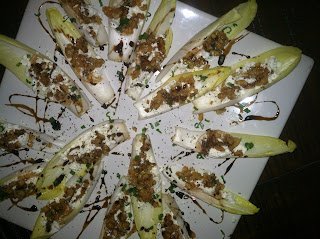 1. Combine the goat cheese, milk, scallion, parsley, garlic, and walnuts in a bowl and beat with a spoon until smooth and creamy. Spoon or pipe the cheese mixture onto the individual endive leaves.