There is no doubt in my mind that some people are total freaking idiots. We watched a National Geographic programme on Sunday night about a volcano in the Congo called Mount Nyiragongo. There were research scientists from all over the globe plus photographers. Nyiragongo has the largest crater in the world and these people climbed the mountain then climbed down into the caldera. There were several levels and the scientific project required some magma which they had actually seen form so they could time and 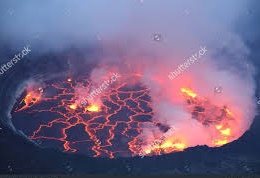 date it. The caldera had a sort of wall around it formed by magma, and you could see the liquid lava splashing over this wall in many places. In the end, the photographer basically persuaded one of the scientists to climb the magma wall in a thermal suit whilst he took pics. The scientist had decided not to do this because conditions were so bad, but once he got close, he couldn't resist it. You can see the 'wall' round the caldera and as I said, the lava was splashing over it and running down the sides. He 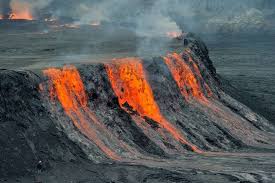 got his lava sample when he climbed the 'wall' and he was finding it almost too hot to hold even through thermal gloves. The idea is, samples of the magma, especially 0 aged magma, can help predict the next eruption and hopefully save lives. All the way through the scientist was resisting risking his life because conditions there were so extremely bad and in the end the photographer virtually talked him into it.  Found a third pic which shows how the lava was splashing down the sides and how tall the 'magma wall' is. There was no way of telling where it was going to splash over next. He climbed right up to the lip of the 'wall'. Scary to watch let alone do. I wonder if the lava had actually splashed at him, whether he would have survived?

Later we watched a programme about illegal fishing. I knew it was bad, but not how bad. People have overfished the seas round them and are now poaching other areas. Those concerned are trying to teach the abusers to be more conservative in their eating. One restaurateur said that sushi is moving to vegetable sources these days. I have said before, Tuna can fetch a million dollars or more. Great efforts are being made to try and stop poaching particularly in those areas which depend on fish for their source of protein. One area in particular is Palaui Island in the Philippines which has turned their waters into a protected marine reserve. I thought the animal poaching was bad enough, I didn't know much about fish poaching.

The minute I saw this recipe I knew I had to share it. I am not sure how gratin became to be used for a dish sprinkled with cheese. It really means with breadcrumbs. This is probably adaptable for my vegan friends. 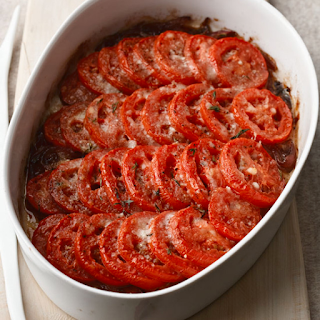 1. Preheat the oven to 425°. Oil an 8-by-12-inch baking dish. In a medium skillet, heat the olive oil. Add the onion and thyme and cook over moderate heat, stirring occasionally, until the onion is softened, about 7 minutes. Scrape the onion into the prepared baking dish and spread evenly over the bottom.

2. Arrange the tomato slices over the onion in overlapping rows. Season with salt and pepper and drizzle with the balsamic vinegar. Dot the tomatoes with the butter and sprinkle the Parmigiano-Reggiano on top. Bake on the upper rack for about 15 minutes, until the cheese starts to brown and the gratin is bubbling. Let rest for about 5 minutes before serving.

Tips
The assembled gratin can be refrigerated overnight. Bring to room temperature before baking.