Having been told by the surgeon that I didn't really need vascular surgery for my legs, I finally decided to go back to my exercise class. We had a fill in trainer today, I have met her before, and she really worked us hard. I managed far more than I expected. I thought I would be sitting down for most of the aerobic section, but much to my surprise, I didn't need to sit as much as I thought. I enjoyed the class too and am so glad I went back. 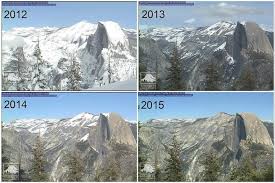 Watched yet another programme on Nature which was about Yosemite National Park, Once again the emphasis was on the lack of snow and how the snow pack wasn't forming nearly as much as it did, which means that the water sources are decreasing. Basically all our rivers and lakes are sourced by the snow packs of the world. As I frequently hear, global warming isn't happening though. I personally believe that it isn't just being caused by human activities, but a lot of it is caused by all the volcanoes which do so much damage.

Stuffed peppers are always good so when I saw this recipe I thought I would try it.

This deconstructed stuffed pepper casserole offers you all the great flavors of stuffed peppers, but it can be ready in a fraction of the usual amount of time. This casserole really does taste like real stuffed 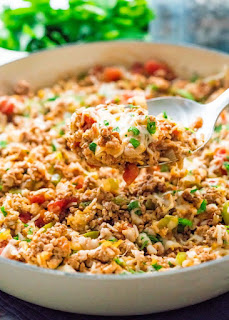 peppers but ready in 30 minutes, perfect for any busy weeknight!

1. Heat the olive oil in a large skillet over medium-high heat. Add the ground pork and ground beef; brown and crumble the meat. Cook for 5 minutes, or until the meat is no longer pink.

2. Add the onion and bell pepper to the skillet. Stir in the smoked paprika, garlic powder, red pepper flakes, dill and season with salt and pepper to taste. Cook for 5 minutes, or until the vegetables begin to soften.

3. Add the rice to the skillet, then stir in the chicken broth and the diced tomatoes, including the juice. With the heat on medium, continue to cook for 10 to 15 minutes, or until the rice cooks through and absorbs all the liquid.

4. Sprinkle with the cheddar cheese and garnish with parsley. Within a couple minutes the cheese should melt on top. Serve immediately with a dollop of sour cream.

The recipe in the book uses instant rice to speed up the cooking process. In this recipe I used a long grain rice. Either rice works in this recipe.

The recipe in the book does not included the cheddar cheese, so the cheese is optional.