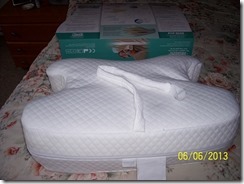 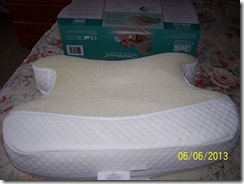 I know some people are particularly interested in this pillow and these are a couple of pix of mine. The top of the pillow is closest and I have shown both sides one of which is soft and fluffy the other has memory foam and is designed to deal with sweating. The top shows a chord which is for attaching the hose preventing it dragging. If you wish to see a video there is one on CPAPmax’s website. I finally located a source for the pillow case. I have also booked another sleep over at the clinic for next week when they will measure how I am doing and whether the pressure is right or needs adjusting. I take my own mask and hose but the machine is built into their computer systems. I can take my own pillow too, of course. I also have an appointment at the end of September to see the doctor, the one who is up for incompetence, I felt like saying “are you sure he will be working at that time?” but refrained.

Dr. Oz had another doctor on his show who was talking about preventing the development of Alzheimer’s disease. Basically it

appears he was touting a vegan diet. His premise being we are absorbing too many minerals from our diets. As he said, we need some minerals, but not as many as we are getting. To see the videos with Dr. Oz and Dr. Barnard click here. He appears to have a number of books out concerning Alzheimer’s, diabetes and other such serious illnesses. I am considering that Matt and I should change our diets a bit but definitely stop taking a Vitamin pill which includes minerals as Dr. Barnard reckons sufficient minerals can be obtained from eating the right foods. Also, Matt is taking an iron supplement which I think he should cut out, but he won’t do so without the Dr. telling him to.

Life has caught up with me a bit these last few days, so I have fallen behind in my blog reading. My apologies to everyone and I will try and catch up asap.

This is one of Dr. Barnard’s recipes

These recipes are loaded with brain-protective foods to help protect mental clarity and reverse memory problems. Combine these brain-power foods with exercise, mental stimulation and at least 8 hours of sleep to begin Alzheimer’s prevention today! 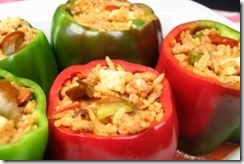