A lobster fisherman has pulled up a bright blue lobster. His name is Sheldon Trenholm of South River, N.S. He took pictures, showed it to some friends and then returned the lobster to the waters as it wasn’t very big. Funnily enough I wrote about a fisherman in June of last year who did the self same thing and was offering it for sale to the highest bidder on the condition they would not cook it. This was Bobby Stoddard of Barrington, also in Nova Scotia. Both men say their 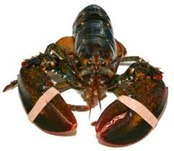 fathers caught one about 40 years ago. The odds are 1 to 2 million on this happening and here it appears to have happened twice in a year. Seems very odd to me. I wonder what happen if they were cooked because the original shell of a regular lobster is NOT red. See the picture. In fact there is an ad for Massachusetts (I think) running on our TV at the moment which shows all kinds of things which are supposed to be great to see there including a red lobster waving his claws. Any red lobster doing this must be a Zombie I imagine.

Another report, a brush fire in British Columbia was caused by a beaver. Apparently a well gnawed tree fell across some power lines. Officials are not sure whether the beaver worked on the tree recently or whether a wind blew it down. In a way its kind of funny although not for the residents who lost power or the fire fighters.

Came across this recipe in a newsletter I get from Recipe du Jour and thought it sounded like a good way to eat cauliflower. 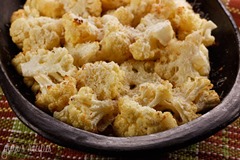 Bake at 375°F for 1 hour or until cauliflower is tender. Makes 6 servings.