As I told you, Thursday night I went for my second Sleep Clinic test. 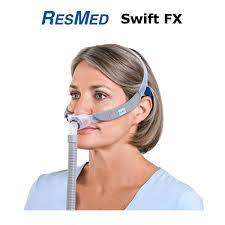 What a chizz, someone told me they don’t put all that gunk in your hair the second time. Oh yes they do. I was plastered with the stuff again. I was told to take my mask and my own hose which I did but in fact they couldn’t use my hose because it's heated, didn’t realise that, it’s only very slight. There were two other patients and we all got chatting for a while. I then discovered that there is a nasal pillow (type of breathing apparatus) which the other woman had and which she says is as comfortable as can be. Now I have an appointment this morning to look at one and check it out. They have charged my Visa for the stuff I already have. I don’t believe this, I washed my hair really well, I thought, and found some more gunk. Damn me, two patches.

The first thing Matt said to me when he picked me up at 6 a.m. “I

have to go to the garage”. Didn’t get a good morning or anything! Turned out there is a warning symbol with the word Check – couldn’t find it in the book so I Googled it on line; it seems to have something to do with emissions. Anyway, he scuttled off once he was breakfasted. I can’t believe this symbol was not in the book which came with the car. Of course it could be nothing at all, just a malfunctioning light, it’s an old car – no such luck, it was a combination of things so our bank balance is feeling the hit once again.

One of my big bugaboos is “its” and “it’s” – I think I have finally got it down right; if it stands for ‘it is’ or ‘it has’ then use the apostrophe, if it’s possessive then don’t. Simple really isn’t it. My apologies to any grammarians who have been driven mad by my misuse – and why didn’t you tell me?

A nice sounding asparagus recipe, after all, the season isn’t over just yet. This one is once again from The Guardian, a British newspaper. I see one of the ingredients is ghee, I have linked it to Wikipedia. For the very small amount though, I would just melt some butter and pour off the fat to use in this recipe.

The combined goodness of antioxidant-rich asparagus and protein-packed almonds makes this a superfood soup. Enjoy hot or chilled, 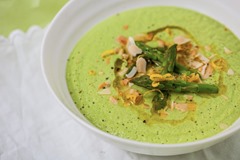 just don't skimp on the lemon zest – it really lifts the creaminess and richness.

1 Toast 25g of the almonds in a dry, large saucepan and set aside for garnishing later.
2 In the same pan gently fry the onion and leek in ghee for 5 minutes until softened, but not browned. Add the garlic and tarragon to the pan and fry for another minute.
3 Prepare the asparagus by snapping off the woody ends. Add the spears and remaining 75g almonds to the pan. Stir, add a pinch of salt and black pepper, then add the stock.
4 Simmer gently for 5 minutes, with the lid on, until the asparagus is tender.
5 Remove from the heat and add the lemon juice. Blend carefully, in batches if necessary. Taste and adjust the seasoning.
6 Serve in warmed bowls and scatter the toasted, flaked almonds on top with lemon zest and a swirl of extra virgin olive oil. Alternatively, chill and remove from the fridge just before serving, then garnish as above.
Recipe supplied by Melissa Hemsley and Jasmine Hemsley.