Elon Musk, The Future, The Past, 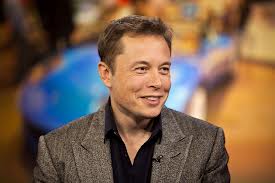 Monday morning I watched a long interview with Elon Musk of whom I had never heard until Stephen Tremp wrote about him. I suppose I actually must have heard about him somewhere before; he started Paypal which I use; I wrote about SpaceX and their space station delivery ship Dragon, and yet I don’t recall ever hearing his name before. Not only is he a very clever young man, he is also a very good looking young man and doesn’t look a bit like one pictures a guy who is, I guess, a nerd. He is very amusing and doesn’t mind laughing at himself. He also has 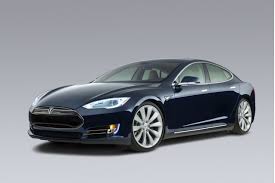 one heck of a lot of irons in the fire. He starts things which people say won’t make money, he doesn’t think they will either, and guess what, they make money. Another thing I had never heard of was the Tesla Car Company with which he is very involved (he’s the CEO). I even had to Google to see what Tesla cars looked like, this is the Tesla S quite snazzy although they are currently not in the price reach of the average Joe being in the $70,000 range. Elon Musk thinks that they will be in the $30,000 range in about 3 years (still out of my price range, however). Stephen Tremp pointed out how the private sector, in particular Elon Musk, are leading the way. 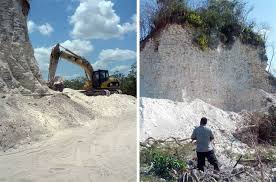 Alex J. Cavenaugh  mentioned Mayan Temples on his blog yesterday and I started looking up information about them and discovered, to my horror that in Belize they have knocked down a 2,000 yr. old pyramid known as Nohmul. A fine of $5,000 is being levied which seems like a bit of a joke. Nobody is really saying who was responsible for the action although one person has accepted ultimate responsibility. From the article and subsequent picture research, I can’t figure out what the actual temple looked like before the bulldozing, There are lot of pix but I was unable to positively identify one as being Nomul. What remains sure doesn't look like any Mayan temple any more. What a tragedy.

Here is another recipe posted by The Guardian, an English newspaper. Transation may be needed, Spring onions are the same as green onions in North America. Prawns are not generally available here either so one would use shrimp, as for the Korean red chili pepper paste, if you can't find it, there are bound to be plenty of similar items you could substitute. 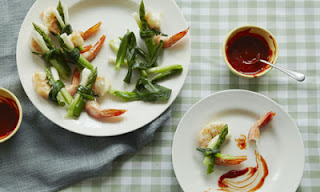 Ganghwe is a general Korean term that refers to a dish of small rolls that have been made by tying Nakji (octopus) and ojingeo (squid) ganghwe are common variations. These saewu ganghwe use prawn and asparagus
ingredients with a thin spring onion. They are prepared in bite‑size pieces and served with a dipping sauce.

1 Combine all the sauce ingredients in a bowl, mix well and set aside.
2 Bring a medium pan of water to the boil. Add the prawns and cook for about a minute. Quickly drain and leave in cold water to stop them cooking. Drain and cut small slits on the inner curve of the curled-up prawns to make it easier to wrap.
3 Remove the tough ends from the asparagus and cut into 5cm lengths. Blanch the pieces in salted boiling water until they have softened, which takes about a minute. Remove with a strainer, shock in cold water and drain.
4 Use tongs to dip the white parts of the spring onions in the same pot of boiling water and hold for about 30 seconds before completely submerging the whole bunch for another 20 seconds. Drain and shock in cold water. Pat the spring onions dry with kitchen paper, gently pressing to remove excess water.
5 To assemble, hold a prawn and an asparagus piece together along with the white end of a spring onion. Tie them by wrapping the other end of the spring onion around the prawn and asparagus several times.
6 Use a toothpick to tuck the end of the spring onion into the roll. Mix the sauce ingredients thoroughly and serve alongside the ganghwe.