In her blog for July 4, Hilary Melton-Butcher mentioned the Great British Menu which is something I had never heard of before, as far as I recall anyway. Apparently a number of top chefs compete to cook the Olympic Banquet and the whole affair is televised by the BBC. There is a web page which details the 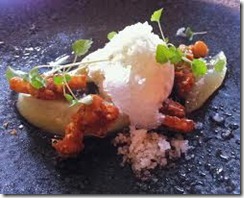 menus and recipes and a banquet was held in The Painted Hall at Greenwich Old Royal Navy College. Quite frankly from what I have read, there was a load of pretentious rubbish. The plates all appeared to be composed of little itty bitty courses combining more flavours than I care to consider and I found it very sad to think that was the best they could offer. One thing which did appeal to me was the sweet cheese ice cream which was part of the complicated dessert menu, it was basically made with Mascarpone cheese, but contained stabilisers which any housewife would have in their pantry!!!  Pity, I thought it would be something one could make at home. The dessert also contained atsina cress which I have certainly never heard of. Having Googled it appears to be of North American origin. That’s the green in the picture. Most of the other recipes are similarly complicated and didn’t particularly make me want to eat them. If you want to see more pictures, they are on Hilary’s blog.

One of the problems in Britain, I think, is that they have been known for lousy food for so

long that now the chefs have gone totally the other way. I don’t know what food is like generally in the UK nowadays but from all I hear it has improved tremendously and even when I lived there, there were excellent restaurants around all across the country which served food which couldn’t be beaten, alternatively you had the kaff (café) on most streets which served the most, IMHOP, awful food.  Whether they still exist I don’t know. Lyon’s was one. They had Lyons’ Corner Houses in London where you could get a decent meal, but in the local towns their food was god awful. I do know that Indian and Chinese takeaways are in abundance these days. For some reason, Indian food has never caught on here like it has in the UK. Of course there are probably a lot more Indians in the UK anyway due to India being part of the British Empire at one time. Pub food seems to be very much an ‘in thing’ these days but I am no expert on it. I am sure England is littered with burger joints the same as anywhere else today, I don’t know if they are as popular as in North America. Pizza joints come a close second over here.

I went to the dentist yesterday with my broken tooth. Because it was rough round the edges it has been grating against my tongue and causing a lot of pain. I had 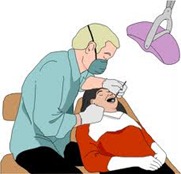 used an emery board which helped, the dentist ground it down some more. It will have to come out though, but, as I am on blood thinners, I have to check with the family doc about stopping them. She won’t answer the question over the phone, so now I have to go in to see her on Saturday. If she won’t permit me to stop the thinners I will have to go to a specialist to have the tooth extracted which will, of course, cost me more money. They will have to cut into the gum to get at what’s left. Yuk. How much our insurance will pay I have no idea, but they don’t seem to pay a lot towards dentistry. I think I have mentioned, I don’t like going to the dentist and this is getting worse.

This is an interesting looking recipe I found on Facebook

I’ve adapted this recipe from The Collection Cookbook, by Liz McGrath, given to me as a gift when I stay 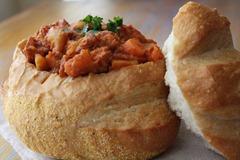 ed at The Marine in Hermanus. Their version of this recipe features more Cape Malay seafood including mussels, calamari, prawns and line fish. I’ve swapped the seafood for chicken below to make this more suitable for the home cook.

Take a peak at this video where I teach the host of Daytime TV how to make bunny chow!

Directions:
1. In a large saucepan, fry the onions until their almost translucent or clear. Then add all your spices and fry for another 1 to 2 minutes.
2. Next add the tomatoes and mix in with the spices and onions. Cook until it forms a paste.
3. Add chicken, potatoes, carrots, and water to the saucepan. Stir together with the tomato paste and bring to a low simmer. Cover and cook for about 30 minutes until the chicken is tender. Stir occasionally. Remove the bay leaves and cinnamon stick.
4. Hollow out a loaf of bread and spoon the cooked curry inside the bread to serve. If desired, serve with a side of rice. Traditionally, it’s eaten with your hands and the bread is used to soak up the gravy. Enjoy!