Big tragedy in my life, I finished the last of my asparagus on Saturday – fresh from the farm asparagus that is. I will now have to wait another whole year before I can get more, boo hoo. Went to a friend’s for supper on Saturday night and she said she hadn’t had any this year – horrors. We had fun sitting out on her patio that evening becaus 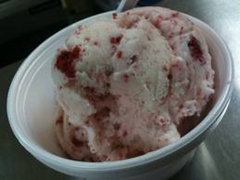 e the temperature had dropped and there was a delightful breeze. We had a picnic meal which was ideal for outside, then our hostess served us with Red Velvet Cake ice cream, have you tried it? Its pretty good. Have you actually eaten Red Velvet Cake? I never have. We were also served some delicious mini caramel cakes. I couldn’t leave them alone. Tiny little cakes with a dollop of caramel through the middle and on the top. Sold at our local grocery store labeled Farmer’s Market. I will not buy any, too dangerous, I wouldn’t be able to leave them alone. Another guest kept trying to push them at me. I ate enough as it was.

days so they can remove my broken tooth. Not something I am looking forward to however, I gather they will have to cut the gum. She also decided to send me for a bone density test which reminded us that Matt had one after he fractured his vertebra and we never heard anything about the results. I get a tad irritated that these doctors never tell you the results of the tests unless there is something wrong. You just have to assume that nothing is wrong and that its not just because the doctor didn’t get the results in the first place. I should keep my mouth shut, I said to Matt, at the beginning of the month, how nice no medical appointments this month, now I have at least three.

On the recommendation of the woman who cleans for us once a month, I have been checking out some of the deals from Kijiji which come through all the time and which I have previously ignored. One I am waiting for is carpet cleaning for $39 for three rooms and a hall. Another was for a couple of memory foam pillows which I like. Trouble with that is one could end up spending a lot of money because the deals are so good. There is, apparently, another site which comes up with good deals too, but I don’t think I need to find out what it is LOL.

Matt was as happy as a grig yesterday because Roger Federer won Wimbledon. I

kind of wanted the English guy, Andy Murray, to win as apparently England hasn’t won Wimbledon in 76 years. That’s incredible. I used to watch Wimbledon devotedly every year when I lived in the UK, but for some reason I haven’t really followed it since we emigrated. Federer is a good friend of William and Katherine’s of course, so they were there to see him win. Matt referred to her as the next queen, she isn’t of course, Camilla is.

This is the quinoa dish I got from a friend the other day which I made on Friday and then we finished off last night. Very enjoyable. 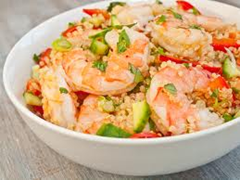 1. Add quinoa, salt and 1-2/3 cups water to a medium saucepan. Bring to a boil and then reduce heat to low, cover, and cook for 15 minutes, until the water is absorbed and quinoa is cooked. Transfer to a serving bowl and let cool.

2. In the meantime, make the dressing by combining the lime juice, Asian fish sauce, vegetable oil, sugar and crushed red pepper flakes in a medium bowl. Whisk until the sugar is dissolved. Add shrimp to the dressing and let marinate until ready to assemble the salad. Once quinoa is cool, add red bell pepper, carrot, cucumber and scallions to the bowl. Right before serving, add the dressing, shrimp and cilantro and toss well. Taste and adjust seasoning with more salt, sugar or crushed red pepper flakes if necessary. Serve cold.

Tips
If you don't have any fish sauce mix some anchovy paste with water.

Author Notes
This unconventional shrimp and quinoa salad with Vietnamese flavorings is nutritious and light. Also, wonderfully satisfying. You can also make it without the shrimp; simply cut back on the dressing a bit.