Until this weekend I had never heard of yarn bombing. 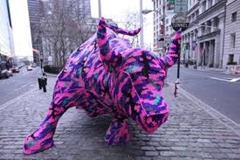 This is the Charging Bull near Wall Street. Apparently women all over have decided graffiti was a male dominated activity so they decided to knit cosies for all kinds of items to make life more colourful. If you look at the article, there are trees, phone booths, statues, buses, you name it, which have been yarn bombed. Apparently it is designated as vandalism or littering but according to the article, the police don’t seem to bother about it too much. Apparently some knitters have been paid lots of money to knit cosies for their products, Toyota for one. Knitting is not my bag, apart from cooking, anything domestic is not my bag mind you, however, even I could knit some of the squares they use for these yarn bombs. By the way, my knitting achievement include one, and one only, sweater knitted many, many, years ago.

Ontario hit a record yesterday for heat, it was 30.2°C but today we got to 33°C. All I know is, it was bloody hot. I couldn’t believe it this morning when I heard them

mowing the grass around the apartment. Predominantly there is nothing but crispy yellow stuff all round the building, certainly where we look out, also the park is in the same condition. So what on earth was there to mow? There are patches of weeds in the front which I agree needed doing, but certainly not round this side. Obviously the company that takes care of our grass must be suffering along with many other such companies. Driving around yesterday, the corn is brown from the bottom to a couple of feet up the stem, I’m surprised the top still survives. Prices are already going up and I suspect we may encounter some shortages soon. The situation is very serious. Discussing it with friends over the weekend they said they had heard that it is considered the next wars will be about water. Glenda Larke, the author, has said much the same thing. In this part of the world, we are very careless with water. I read in a book I have about the Great Lakes that if it weren’t for them humans couldn’t survive here, but they too are losing water and not as deep as they once were. Ontario has something like 1,000 lakes and they are all getting lower too.

We had a fun time on Saturday evening and we ate English Stuffed Peppers followed by London Broil. My friend brought the dessert which consisted of vanilla ice cream, blueberries and raspberries topped by home made truffles with Grand Marnier. It was absolutely delicious, particularly the truffles. She also brought Brie and crackers so we were all stuffed by the time we had finished..
This recipe from Cooking.com is just up my street, chocolatey, gooey, delicious looking. 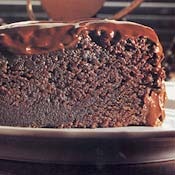 DIRECTIONS
FOR THE CAKE:
Preheat the oven to 350 degrees F. Oil a 9-inch round cake pan. Line pan with parchment paper.
In a mixing bowl, sift together the flour, baking soda, and salt.
In the top of a double boiler set over simmering water, heat the coffee, bourbon, chocolate, and butter, stirring until the chocolate and butter are melted and the mixture is smooth. Remove the pan from the heat and stir in the sugar. Let the mixture cool for 3 minutes and transfer to an electric mixer. Add the flour mixture to the chocolate mixture, half a cup at a time, and beat medium speed for 1 minute. Add the eggs and vanilla and beat until smooth.

Pour into the prepared pan and bake for 1 1/2 hours, or until a skewer inserted in the center comes out clean. Let the cake cool completely in the pan. When cooled, turn out onto a serving plate.

FOR CHOCOLATE ICING:
Combine the chocolate and butter in the top of a double boiler and stir over low heat until they are melted and combined. Cool slightly and then ice cake.