I nearly forgot, had to go for an X-ray yesterday and in the waiting room saw a guy with a T shirt which said - I don’t need to Google, my wife knows everything. Thought that was hilarious. Talking of Google, did you see the doodled yesterday for Emilia Earhart’s 115th birthday, I thought it was another good one. No good getting one for Matt, he doesn’t use the computer anyway. One can get them on the internet though. I also received the memory foam pillows I had ordered on Kijiji Daily Deals. Now all l have outstanding is the carpet cleaning which takes place at the beginning of next month. Never thought of it before but if you go to the following page you can see all the Google Doodles.

having a bone marrow transplant due to his leukemia. Now wouldn’t that be something? He says he is cured and plans to stay that way. He still has recurrent leukemia but they reckon the AIDS virus has been destroyed.

We had the recipe below for supper last night, it was pretty tasty. Ate it as a main course with a plain salad. It was a bit of a pain to make, I had to shell all the nuts and then they wouldn’t release their inner skins. Having Googled I put the nuts in boiling water for 2 minutes, drained them and then rolled them in a tea towel to remove the skins. It worked. Then I put all the sauce ingredients in a blender and they wouldn’t blend, in the end I added a bit more olive oil, I thought there was enough lemon juice. I still had to keep poking at the ingredients to get them to blend properly. However, once it was all done, it was worth it. I found the recipe on World Wide Recipes and picked up the picture elsewhere.

I am never quite sure with recipes like this, should the shrimp be cooked and shelled before you weigh it? Makes a difference, you lose close on 1/3 of the weight with the shells. In fact I used a pound of shrimp with their shells (not heads) on and served it by spreading the sauce on a piece of toast each and then topping that with shrimp. There was, in fact, enough for two nights, i.e. 4 people. 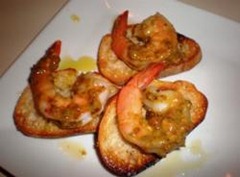