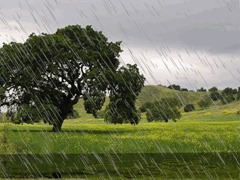 Wednesday night we had one hell of a storm with quite a bit of rain. How much rain I have no idea and haven’t heard it mentioned anywhere. Suffice to say this morning everywhere looked as though it had had a good soaking. We so need this rain, at the time of writing we are supposed to get more on Thursday afternoon. I don’t know how much will be enough, but we sure ain’t had it 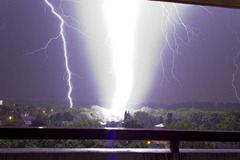 yet. However, hopefully what we have had will do the grass and trees some good. I must say, the storm kept me awake for a while, the lightning flashes on their own were lighting up the bedroom constantly apart from the terrific crashes of thunder which, in both cases, seemed almost continuous. I had to include this spectacular picture by Justin Cormier which was taken a few miles away from us in Guelph, and published on the Weather Network. I know we had similar lightning here, I couldn’t even look towards the window it was so bright.

This is a scary piece of video which has been seen on TV and I thought I would share in case you didn’t get to see it. I think it was a fairly small vessel visiting this iceberg which decided to calve down whilst they were filming it. Glad I wasn’t there I would have had to change my underwear.

There are more videos you can access from this clip which shows an iceberg calving and then rolling. The guide ends up holding a piece of crystal clear ice which has air trapped inside from thousands of years ago. Guess I always knew people were nuts LOL. I like watching the film, but I wouldn’t want to be there.

Although asparagus season is over, I still liked the look of this recipe from Web MD and thought I would share it with you. I never think of Gruyère without thinking of Matt who went on a trip to Switzerland with his first wife and apparently scarfed down a pound of the stuff all on his own. He assures me that the cheese, when bought in the village of Gruyère and absolutely fresh, is much better than the cheese that we can buy.

Chicken and Asparagus with Melted Gruyère

For this elegant dish, boneless chicken breast and asparagus are smothered in a luxurious white-wine sauce with just the right amount of melted Gruyère cheese. 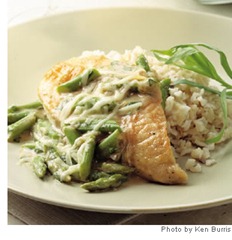 Tarragon and lemon add a delicious light flavor that is perfect with asparagus.