I hope you will all have your fingers crossed for me this afternoon as its today I go to the dentist to have both a small filling (which I hate) and my broken tooth root removed (which is worse). I am not a happy camper about this and am, of course, making a big fuss about it.

Actually I’m in the wars at the moment, my neck is in agony when I move my head, I think because the air conditioner was probably blowing on it. I’ll be damned careful that doesn’t happen again.

last night. We enjoyed it, but it was a tad sweet. Next time we would leave out the sugar. Also, it said the recipe was for 4. We divided it in half, wasn’t nearly enough, so we ate it all. We have some coconut left over and I was going to use it for Piña Coladas but found we had run out of pineapple. Serious that. Maybe we can get some on the way home from the dentist, I am sure a couple of Piña Coladas would be really good medicine for me, don’t you agree. I actually haven’t had one for several years. I remember one day in the Carolinas, gotta be some 25  years or so ago, when a couple of girlfriends were making them and we joined in. I’d never had them before, but it didn’t take me long to find out how delicious they are. The recipe I have calls for 3 oz. rum, 3 tbs coconut cream and 3 tbs pineapple. Blended and lots of ice.

sat and watched The Sting last night with Robert Redford and Paul Newman. Did you ever see the movie, it was one of the best. It’s a long time since we saw it last. I nearly always forget exactly what the twist is at the end. Two of the greatest film stars as well. Paul Newman is no longer with us, but Robert Redford is. He is about 76 now. Butch Cassidy and the Sundance Kid was a great movie with those two stars in it as well.

This is what we had for supper the other night. We enjoyed them very much, but in future we would double the amount of cheese. We didn’t use light cheese of course, but regular cheddar cheese. 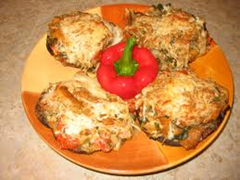 Submitted by: LIZBETHMSR
Large portabella cap stuffed with sautéed veggies and topped with cheddar cheese - a meal in itself!

Gently clean off any dirt from the portabella mushroom cap. Pull the stem out of the center and chop up the stem - set aside

Chop 1 small onion and enough pepper to make 1/2 cup, add to the mushroom stem. Spray a frypan with a little olive oil and sautée all the veggies EXCEPT the mushroom cap, until tender crisp. Drain any excess juices.

Place the mushroom cap on a foil lined baking sheet and top with the sautéed veggies. Sprinkle the grated cheese on top and bake in the 350 oven for 10 - 15 minutes or until the mushroom cap is tender and the cheese is melted and bubbly.
Season to taste.