Yesterday was our bowling banquet to finish off the summer season. My team

came in 5th and Matt’s team made it to 2nd place. Grumble grumble. The team that came in 4th, I have no idea how they beat us, but they did. Oh well, that’s how the cookie crumbles isn’t it? The new winter season doesn’t start til August 27, so that’s it for a few weeks. For Christmas and the summer banquet we get sandwiches and such and Pauline, who runs the alley, makes the most wonderful egg salad. I know how to make egg salad you understand, but not as well as she does, its delicious and I look forward to it twice a year. Its not the only filling, but it’s the best.

Not much to say, I was absolutely beat last night, probably the excessive heat. Supposed to have felt as if it was in the 40’s. When I got home in the afternoon, I threw together a couple of quiches for supper, ate, watched Jeopardy and fell asleep.

ns locally. They have a big advantage in that they will cut meat, so we bought three of the large lumps of inside round that we call London Broils (technically that is a recipe not a cut of meat). We haven’t stocked up in a while. I also bought some ground veal which I want to use for another 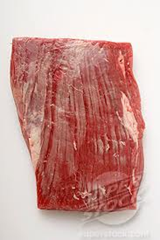 batch of Tourtières later on. They had to grind the veal for me as they no longer carry it. He recommended another store, but I only want 1lb. at a time so didn’t bother for now. I also finally managed to get some flank steak yesterday and thought this recipe looked good. I would probably reduce the chillies in it mind you. Flank steak is a lot thinner than the London Broil cut and has to be sliced almost horizontally and very thinly as you can see in the picture below. London Broils have to be sliced at an angle as well, but not as acutely. 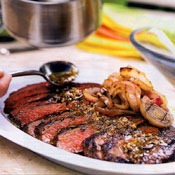 Toss a few red onions on the grill to serve with this dish; a salad of tomatoes and cucumbers rounds out the meal nicely. My family loves this versatile mojo on chicken as well as on flank steak.
INGREDIENTS

TO MAKE THE MOJO: Mash the raw garlic, chiles, salt, and cumin together in a mortar and pestle until fairly smooth. (Alternatively, use a food processor, pulsing until the ingredients are finely chopped but not puréed.) Scrape the mixture into a bowl and set aside.

Heat the olive oil until fairly hot but not smoking, and pour it over the garlic-chile mixture (the oil should sizzle when it hits the cool ingredients), stir, and let stand 10 minutes. This will cook the garlic slightly. Whisk in the sour orange juice and vinegar. Season with salt and pepper and set aside to cool completely.

FOR THE STEAK: Put the steak in a zip-top bag or a shallow bowl and pour in 1 cup of the cooled mojo. Seal and refrigerate for at least 2 hours or overnight, turning occasionally. Refrigerate the remaining 1 cup of mojo.

TO COOK AND SERVE: Light a charcoal or gas grill. When the grill is very hot, remove the steak from the marinade (discard the marinade), pat dry, and season with salt and pepper; cook 5 to 7 minutes on one side and 3 to 4 minutes on the other for medium rare. Remove from the grill and let rest for 5 minutes. (If you like, grill the Bermuda onions as well - you can put them on at the same time as the flank steak; grill 6 to 7 minutes per side.)