Went to the dentist as I may have mentioned, and had both a filling and an extraction. She ha

d to keep pumping anesthetic into me. When she got around to removing the broken remains of the tooth she had trouble a) getting hold of it and then b) removing it. Bloody thing just didn’t want to leave me. Finally it gave up the ghost and later, so did I. By the time all the anesthetic wore off I was in a lot of jaw pain and I was hungry. For supper I had some asparagus soup which I had doctored up with a couple of spoonsful of plain Congee to give it some extra body. Right now I would kill for a sandwich or something.

Once again, a video explaining the Higgs Boson – do you care? I find it absolutely fascinating. I discovered this video through the Blutonian Death Egg a blog by Rusty Webb.

I have been watching more and more videos and explanations and am beginning to get something of a grasp on this. The video above is pretty fast, but if you watch it a couple of times, it does help make things clearer. My first husband was a physicist and obviously would have understood all this. Not that that would have helped me, I could never understand a lot of what he told me, like if regular math wouldn’t solve a problem, you invented a math that would solve it. How can you do that? One and one is two surely? Apparently not always. Way beyond me.

Interesting post from Damyanti at Blogging A to Z yesterday as well, asking if 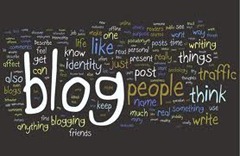 blogging was obsolete and positing that most blogs are read by other bloggers. I do somewhat agree with that idea. Obviously I don’t know how many of my readers are bloggers, but I know a lot of them are and I know a lot of my friends, for instance, do not read my blog. I can understand reading it and saying “what a load of old rubbish, not reading that again”, what I can’t understand is not reading it a couple of times at least to see what its all about. Not only that, if you don’t like my  blog, there are thousands of them out there, many of the ones I have been discovering lately are very thought provoking or full of great information. Many of them deal with hobbies of one kind or another.

Needed a bit of good news yesterday, we discovered our pensions are being increased, not, of course, by very much, but nevertheless they’re going the right way. I had read there was an increase coming, but didn’t know how much, better than I expected.

Another good looking recipe from BBC Food – the recipe originally called for prawns but I changed it to shrimp as one doesn’t see prawns around here. In fact I have never seen them anywhere I have visited in North America. 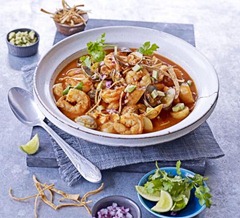 Toast the chillies in a hot dry frying pan for a few moments (they will puff up a bit), then remove. Deseed and stem chillies, and soak in boiling water for 15 mins.

Heat the olive oil in a large saucepan over a medium heat. Add the onion and garlic, season and cook for about 5 mins or until softened. Add the chipotle paste, reconstituted chillies, cumin, stock and tomatoes. Sauté for 5 mins, then purée until very fine in a blender. Pour back into the pan and bring to the boil. Reduce the heat and simmer for 10 mins. When close to eating, add the prawns, fish fillets, clams and potatoes. Place a lid on top and cook for 5 mins over a medium-high heat. Add the lime juice and serve with lime wedges, avocado, coriander, red onion and tortilla chips for sprinkling over.