We have all agreed to meet up but unfortunately one of  the group wasn't there. Her hubby was sick. Asked for my number to be passed on to her. Those who were there have all given me their emails and phone numbers - so guess who has the job of coordinating?

We just watched a fascinating Nature documentary which explained the work of certain scientists starting with Bob Paine 60 years ago, when they discovered the existence of keystone animals in ecosystems - not necessarily, as they had first thought - predators only. By re-introducing such keystone animals or by not culling others, they have shown that ecosystems can recover dramatically.  Bob Paine started it all by removing starfish from tide pools and found that eventually there was no biodiversity in these pools, just mussels. It tickled me they showed pix of the starfish being hurled long distances into the sea away from certain tide pools. I thought it was funny and wondered what the starfish thought of being hurled through the air. It was all very important research. It made me think of another documentary which showed a man in a desert area in some part of Africa, who used termite mounds to accumulate rainwater and eventually turned a large area into a woodland and good land for growing his crops. Took 40 years, but if he could do it, it seems to me deserts could be turned into living land again. We can save the earth we have been destroying.

After my class this morning I went to the grocery store and then to Subway to get lunch for us. Back home and ladydog brought the groceries upstairs for me and then we fed ourselves. Zoey was attending to Matt the whole time because he had been feeding her the dog treats ladydog makes for her. Talk about cupboard love. She is a nosey hound though, wants to know what everyone is doing and what they are handling, be it food or something else. We will miss the pair of them whilst they are away.

One thing ladydog made me think of, cauliflower rice. I made it once before and remembered it as being difficult and not great. However, I made some to go with our supper tonight and it was dead easy. I  think I have a different machine now, not my big food processor but a small one which is part of my hand held blender and using that made it so very easy. More cauliflower rice on the horizon. I was getting tired of stuffing myself with rice all the time.

Just left to go see a programme about The Day the Dinosaurs Died. I had seen it before, but it was interesting to see it again. 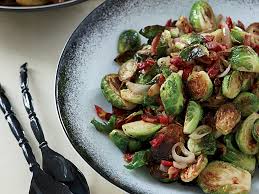 2. In a large, deep skillet, heat 2 tablespoons of the oil. Add the shallots and cook over moderately low heat, stirring, until lightly browned, 10 minutes; scrape into a bowl.

3. Add the remaining 1/4 cup of oil to the skillet. Add the brussels sprouts, cut side down, and the pancetta. Season with salt and cook over high heat, stirring occasionally, until the sprouts are browned and tender, 10 minutes. Add the sun-dried tomatoes and shallots and cook, stirring, until warm, 5 minutes. Season with salt, transfer to a bowl and serve.