I ordered a Christmas present in August was beginning to thing I had been conned or something, but I had a UPS email today saying it would arrive tomorrow, Thursday. Fingers crossed. I was planning to go bowling, but I think staying in for the parcel might be more important. Or is it, the UPS store is just round  the corner if  they deliver when we aren't here. Will make my decision later.

I was surprised to get an email from ladydog this morning (Wednesday) as I thought she was on her way to the Panama Canal but turns out they were in Fort Lauderdale where they were waiting to board their ship in the afternoon. My geography not being as good as it should be, I did some searching and located where they were and where they were going. I then watched a 5 minute (speeded up) video of a ship going through the canal and learned things I didn't know. I thought it was just one set of locks, silly me. In fact they lift the ships 84 ft., that is a hell of a distance


A few years ago there was a camera there and you could watch ships - frame by frame - going through one of the locks but that doesn't seem to be available any more, pity, thought I could watch her ship. Matt said I woudn't be able to see her though LOL. I replied I could always get her to wave.

We were just watching a frightening programme about bridges collapsing, starting with a bridge in Genoa, Italy, which collapsed last year. I am so glad we don't travel any more, I would be terrified to cross any of these bridges. There were 2 young men talking about Genoa. They were on the bridge, one of them had his car drop 100 ft and the other was found hanging inside his vehicle under the bridge in the air. Lucky to be alive. However, there have been lots of bridge collapses over the years and they are working to find out why. - is it old age or faulty design. A lot of the bridges are around 50 years old. Made me think about that huge bridge that crosses the Chesapeake Bay in Maryland. Goes on for miles. That bridge is terrifying without any thought of it collapsing. Searching for information, I just found a video about that bridge and the fact that some people are too scared to drive across it. They have to go with a guy who makes a business of ferrying people across. I have to include that video too.


So, I would not cross it again, no matter what. I did start thinking of British bridges I know that have spanned the Thames for hundreds of years. Although there are newer bridges there which they are worried about.

I have been sniffing and snuffling as well as sneezing a lot lately. Checking with the bowling alley owner, who regularly suffers from allergies, he is doing the same, so something is affect me which is unusual. Was just having a sneezing fit writing this. Don't usually have this problem.

Didn't go to the Mandarin, miserable day and I was tired.

I just found this recipe which I might try on Friday evening for supper. I didn't know what Kirby cucumbers were, but having Googled, I think I would stick to English cucumbers anyway. I always have one of those in house. I would also cook the rice in the Instant Pot too.

In Vietnam, palate-cleansing ginger is typically served with rich foods like duck. Here, a pungent 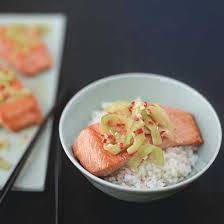 ginger dipping sauce is paired with salmon, which is loaded with omega-3 fatty acids.

1. In a medium saucepan, bring 1 1/2 cups of the water and the rice to a boil. Cover, reduce the heat to low and cook the rice for 12 minutes. Remove the pan from the heat and let stand for 5 minutes.

2. Meanwhile, in a mortar, pound the ginger with the sugar, chile and chopped garlic to a coarse paste. Transfer the paste to a bowl and stir in the remaining 1/4 cup of water, the lime juice and the fish sauce. Add the cucumbers.

4. Mound the rice in bowls. Top with the salmon, garlic cloves and ginger-lime sauce with cucumber strips and serve. Pass any extra sauce at the table.