I really wasn't in the mood to go bowling, don't know why, but we went anyway and I had two of the best games I have had in a long while. 186, 131, 187. Not only that, I got a turkey which everyone said was appropriate because it is Thanksgiving. Not quite sure what happened in the middle there, Nothing wanted to go where I threw it.  However, my average went from 138 to 146. We also took  maximum points off the other team.

Don't really know the other team members yet, only bowled with them once before, but enjoying  their company. One of them was telling me about the cannabis he buys which is, apparently, quite a bit stronger than I get on prescription. However, from what they say, the prices are quite a bit stronger as well. Don't think I could afford them at all. Thinking seriously about whether I can afford the stuff I get now. I wish the government would get off it's rear end and give a Drug Identification Number to cannabis and then maybe our insurance would pick up the tab.

Finished off our turkey breast for supper, still tasted good. Watched Jeopardy as usual. I am dreading when Alex Trebek  has to quite because of his cancer. Won't be the same show at all. Later we watched the 2018 Royal International Nova Scotia Tattoo. Incredible show. Missed some of it so hope we get a chance to see it again.  I remember being taken to see a Royal Military Tattoo in London many years ago. It was brilliant and these from Nova Scotia are no different.

I was looking through some recipes I had saved but never tried and thought this one sounded good.

Enjoy takeout-style orange chicken—without having to tip the delivery guy! Your family will enjoy 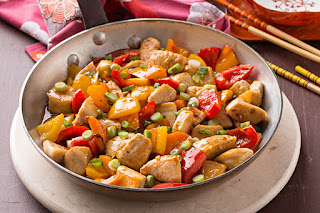 this simple version just as much (if not more).

3. Heat oil in large skillet on medium-high heat. Add chicken and peppers; cook 5 to 6 min. or until chicken is done and peppers are crisp-tender, stirring frequently. Remove chicken mixture from skillet; cover to keep warm.