Interesting, on the news this weekend, it appears the British are waking up to what they've done and there have been so many calls for a re-vote that it crashed the government website. Even I voted for a redo. Unfortunately a lot of people who voted didn't really understand what they were voting for - unsurprisingly, it is pretty complicated. Many of the English tend to be xenophobic and really don't like anything unless it is English. Not that they have ever tried it, but it isn't English so it can't be any good. Of course I am English, but luckily that mentality is not one I inherited. Obviously from the votes, neither did 48.1% of the voters. On Good Morning America they said a second referendum is entirely unlikely. Pity. I also understand the government could veto the voting result too. I don't suppose they will. There are so many ramifications to the whole thing, it may not get sorted out for quite a long while.

In this area we have had pretty high temps over the weekend with it hitting the 30°C and our air conditioner running full blast. We haven't had a lot of rain lately either so I think we will soon be talking drought. There was quite a storm on Sunday night, but I think it was just lightning with a bit of thunder, no rain. I have avoided going outside. I am getting like so many others and hiding from the heat.

I checked out a scone recipe that I  used to make many years ago in England and find the only thing I don't have is baking powder. I really should try making them again instead of buying them. Maybe I should also try making Cornish Pasties too.

Although the asparagus season is not quite over for me, it soon will be, so I chose a Chinese dumpling recipe instead.

Plenty of ginger and scallions add terrific flavor to these juicy shumai dumplings from Andrew Zimmern. 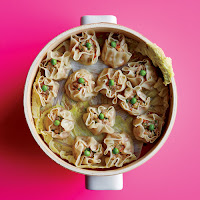 1. Make the dipping sauce In a small bowl, whisk the soy sauce with the black vinegar and chili-garlic sauce.

2. Make the shumai In a medium bowl, combine the pork and shrimp with the scallions, ginger, soy sauce, sesame oil, Shaoxing wine and salt. Cover with plastic wrap and refrigerate for 4 hours.

4. Repeat to form the remaining dumplings.

5. Fill a wok or large skillet with 3/4 inch of water and bring to a simmer. Line 2 tiers of a bamboo steamer with cabbage leaves, overlapping them slightly. Add the dumplings to the steamer and stack the tiers. Cover and set the steamer in the wok. Steam the shumai until firm and the filling is no longer pink, 8 to 10 minutes. Garnish each with a pea and serve hot with the dipping sauce.