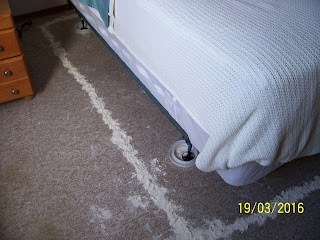 I have decided I could sell my landlords some shore property in Colorado. I have tried to save them money, it costs them something like $800 to have the whole apartment sprayed for bed bugs and all I want is a new $50 cover for Matt's box spring. The exterminators have convinced her the Diatomaceous Earth is ineffective. We think it has done a wonderful job. The only reason, as I keep explaining, we are having a problem is because the box spring cover is torn although I have mended it to death with duct tape and it may be doing the job by now anyway. Any bugs which might be getting out, don't leave the area because of the Earth which is sprinkled round the bed and which is death to them if they cross it. There are NO bugs ANYWHERE else. However, nobody listens and because I am not a professional, I cannot possibly be right.  My main problem now, we have to vacuum it up before the pest people come in again. Doing that round Matt's bed may well let the little perishers out. Not only that I have to hire a shop vac because our vacuum has a Hepa filter and won't do the job properly. As I have mentioned, I am hiring a company to come do some vacuuming right through plus several other jobs which have to be done before the exterminators come. However, if I find our pensions from the UK have dropped badly because of the pound, that will be cancelled. We are due to get a payment in the first week of July so we will know then.

Yesterday I got my last batch of asparagus, Because we have had no rain, it is quite skinny now. I am going to be moaning until next April/May. I
actually bought 6 lbs. Should last a bit. I have about 3 lbs. frozen and two jars of pickled so it will keep me happy for a while. Obviously the frozen isn't a patch on the fresh, but it's better than none at all and even better than the asparagus which is for sale all year round in our supermarket. Not sure where that comes from (probably Mexico) but as one has to break off the ends, you know it's not very fresh. Do they get Mexican produce in the States? Maybe the wall will stop such heinous practices!!! Or is that OK?

This recipe looked so colourful I thought I would share it. I have a similar recipe which I have made with just Heirloom tomatoes and that is very good. I think this will be even better.

This tasty tart is full of Mediterranean flavours, with ripe plum tomatoes and sweet peppers, your 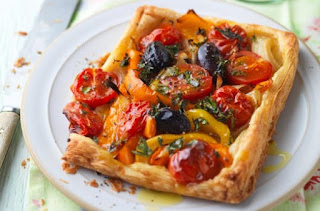 family will love this summery recipe

Got leftover chicken? Put strips on top of the galettes for a meaty alternative.