An Australian blogging friend, Denise Covey recommended a series of books which sounded very good, so I got the first one from the library. It is called The Bookseller by Mark Pryor and I am thoroughly enjoying it, so much so I have ordered the next book. The series is known as the Hugo Marston Novels, and features a man who was with the FBI and is now head of the security division in the American Embassy in Paris. He is also a lover and collector of rare/old books which has drawn him into a friendship with a bouquiniste or bookseller from the stalls along the river Seine on, I am guessing, the Left Bank. He is purchasing books from his friend when a thug comes along and kidnaps the bookseller. From there the story gets really exciting. Bent cops, gorgeous woman, a gay Baron and a smattering of dead bodies. I happened to write to Mark Pryor saying how much I liked the book and commented that I had had the recommendation from Australia; that he was in Texas and I am in Canada. He replied agreeing it was worldwide. I then discovered he too is from England and told him I was as well. Quite an international travelogue. I then discovered his mom is from North Carolina which is where we lived for 12 years. Mark Pryor tells me that the next book, The Crypt Thief, is somewhat darker. I am about to start it this evening so I will, no doubt, find out. If you read this blog Mark, thanks so much for these stories.

For supper, Thursday night, I decided Matt should cook for a change, he hasn't done much cooking in a long while. We had Chicken with lemon and Capers which came from a Readers Digest book many moons ago. I still have the book but it is falling to pieces. With it we decided to have snow peas so I looked on line for ideas and came up with a simple, but tasty way of cooking them.

Chicken Breasts with Lemon and Capers 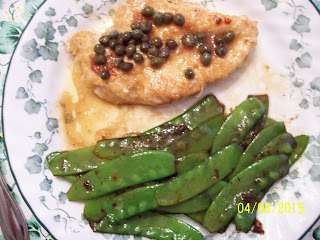 1. FLATTEN the chicken first by placing it between two sheets of Saran wrap and beating.

2. Combine the flour, pepper and paprika on a plate. Press the chicken breasts  into the mixture, coating them evenly all over and shaking off any excess.

3. In a heavy 10 in skillet, heat the canola or corn oil over mod high heat for 1 mins. Add the breasts and cook about 3 mins on each side, do not overcook. Transfer the breast to a heated platter.

4. Add the chicken broth to the skillet scraping up any browned bits on the bottom. Stir in the lemon juice and capers and heat through. Pour the sauce over the breasts and serve.

For the snow peas, I sautéed them in canola oil (should have been sesame but I am out) then when they turned bright green I splashed some soy sauce into them; added grated ginger and grated garlic. Serve them straight away. They were delicious. In a Chinese restaurant they would wok these and not add the ginger and garlic, but apparently a home stove cannot get a wok as hot as they do in a professional kitchen which changes to potential taste.