Many of you will be aware that I went to see the vascular surgeon this afternoon, Thursday,  He has operated on my veins a couple of times before, however, this time he said that although my carotid artery was blocked 70% it was fairly stable and unless I had a stroke or a TIA (mini stroke) he didn't feel it was necessary to operate. He said there was only a 2% likelihood of this happening and if he operated it would only reduce that to 1% so he proposed not doing anything at this time. He figured the fact that I am already on blood thinners was sufficient treatment for now. We discussed my collapse in the elevator early in the summer, but he didn't think it was really connected. So that's good, no operation in my future.

I wanted to have a break from cooking, and anyway, I have a birthday coming up, so we were going to go out for dinner.  I then ended up with a headache so didn't feel much like doing either. However, I remembered a restaurant which had opened just down the road from us so we decided to go and try it. I't name is A & A Grill Restaurant. It isn't a grill though. It turns out the young men who run it are from Afghanistan and at the moment they offer three Indian dishes, three Afghani and three Western (someone had fish and chips they looked good). Matt was grumpy but as he has eaten biriyani's before, I got him to choose a Chicken Biriyani which came with a small side salad. I opted to try something different though and chose a dish they had listed as Man Tuu. It was well presented although simple, and absolutely delicious. It was served with Dahl and a yogurt sauce. So of course I had to Google it. This is what I found. There are a number of pictures showing how to make the dumplings, etc. Matt ate every bit of his meal so I guess, grumpy or no, he enjoyed it. I will be back, he, perforce, will have to come back with me. LOL. I am really thrilled to have found this little place, it is very plain inside and a bit lacking in atmosphere. Once upon a time it was an Italian restaurant, Ennio's, They did so well they moved to the other side of town, I think.

What is Afghan Mantu? A Brief Background and History 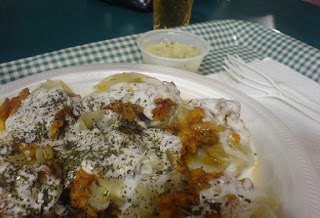 Afghan mantu is one of the most popular dishes from Afghanistan. It is a meat (usually beef or lamb) stuffed dumpling that is steamed in a multilayer steamer. Mantu is served on special occasions and often during large gatherings. In Afghanistan, cooked mantu is often sold at markets and busy streets, much like hotdog stands. Mantu can be served as both a main or side dish.
Afghan mantu dates back to the time of the Turkic and Mongol horsemen of Central Asia. It is believed that the horsemen carried frozen mantu during the cold winters while traveling long distances and then boiled them over camp fires for supper.
Afghan mantu is served with chaka (which consists of drained yogurt, minced garlic, lemon, salt) and a variety of sauces and toppings, including ground meat, mixed vegetable, chickpea, or even just cooked onions. The recipe below will show you how to make Afghan mantu served with Chaka and a mixed vegetable sauce. Enjoy!

Ingredients for the Mantu

Ingredients for the Mixed Vegetable Sauce

Before you start preparing and making/cooking your Mantu, keep these helpful hints below in mind:

Noshe-Jaan!
Have a great day