I just discovered we have a Donkey Sanctuary in the area. Never heard of it before. Apparently they have over 100 donkeys in their care. They are a not for profit organisation. Heard about them on the local radio because there is a walk being organised to benefit them. They have visiting on Wednesday and Sunday so I shall persuade himself that we should go. I just love donkeys. So, I thought, do most people, but from looking at their web page, maybe not. They are certainly loaded to the gills in other parts of the world, but one doesn't think (well I don't) of them as being working animals round here but again, from what they say, I am wrong.

The weather has been absolutely incredible here lately, we have had the most beautiful days. Warm enough to sit out but not too warm. Lots of sunshine but cool at night for sleeping. Having written that, Sunday seems to have changed somewhat.

I get a regular email from National Geographic with current award winning pictures. This one, showing Mt. Kilauea - a volcano which has been erupting on Hawaii's Big Island for the last 30 years - pumping out lava and setting light to all in it's path. I found it pretty incredible and thought you might like to see it too. Some of the shots made me wonder where the cameraman was standing. Others I presumed he was in a chopper.

one egg. Well, I guess I was determined, I grabbed for something in the fridge on Sunday and forgot I had a basin with the last two eggs in it standing on top. So, I not only broke two eggs, I broke the basin as well. Fate was quite determined I suppose. What a mess and what a pain to clean up. How come broken china or glass spreads so far? Now that really is inconceivable!!

I chose this recipe because the picture looked delicious.  I am afraid, being a totally lazy (and somewhat inept) pastry maker, I would be using a bought crust. It turns out much better than I can make it.

This is my favorite tart because it’s made with whole lemons. I fell for it twice—first when Daniel Boulud made it, and then when I had it again in Paris at a patisserie and it reminded me just how much I love it. 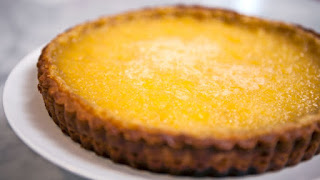